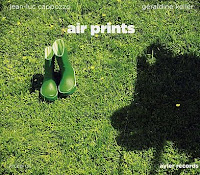 French trumpeter Jean-Luc Cappozzo and vocal acrobat and flutist Géraldine Keller bring a fascinating and unusual duo album. In this intimate setting trumpet and voice create a very human dialogue expressed through the use of the air in their lungs, finding new and alternate ways to interact, full of sensitivity and fragile openness to one another. The sounds touch and fuse and create a varied mix of pure beauty and daring sonic excursions, ranging between anger and love.

Both musicians stretch the possibilities of their instruments creating resonance around silence, in a light and vulnerable way, full of surprise and wonder. Some tracks, like the short "Sur La Balançoire" (On The Swing), is playful and fun, and indeed moves back and forth. Actually, the picture on the cover is made by French photographer and co-blogger Franpi "Sun Ship" Barriaux, whose daughter's boots are waiting for her on the lawn while she is playing on the swing, as her shadow testifies.

Most of Keller's singing is wordless, with the exception of two poems - or improvised reciting, in French and German. For once - and this is pretty rare - I don't find the reciting of poetry artificial. That is the result of Keller's authentic voice, which is passionate yet devoid of the usual 19th century bombast declamatory style full of self-importance that we usually get in modern jazz poetry.

Keller's flute-playing, as on "Le Chinois à Bicyclette" (The Chines on the Bike) sound ethnic, and is equally free and creative as her voice.

The long title track that ends the album is by itself already worth the purchase to those with minds sufficiently open to leave the beaten track.