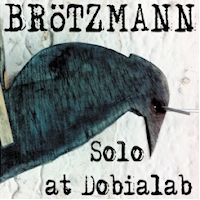 After one of my last reviews, a commentator suggested rather negatively that I regularly write about almost every Brötzmann release, suggesting that this is the only thing I care about and that I am ignorant to all other artists. Well, I had no problem writing about Brötzmann exclusively (albeit I would never ignore other musicians) since I consider him one of the most important artists in the last 50 years (sic!) and his titanic output is worth every line on this blog. Recently there were two albums, a solo performance in Italy and a duo with Hamid Drake, one of his favorite drummers.

“Solo at Dobia”, his tenth solo album, is an ambiguous listening experience. Brötzmann is one of a few who can captivate an audience with a solo performance (like Steve Lacy, Anthony Braxton, Roscoe Mitchell or Evan Parker, for example) and at the age of 70 he seemed to be at the peak of his art. On this album you get it all: his blues background, the wild and angry cries, his bellowing style, his deep musicality, his subtle way to include older compositions. Colin mentioned in an e-mail to me that he loved the way how the "Master of a Small House" theme from “Tales Out Of Time” (HatOLOGY, 2002)  is modulated four or five times, he used the phrase “resurfacing like an idée fixe”, which hits the nail on the head: for the first time it comes up  after six minutes in “Dobia 1”, then very briefly after seven minutes in “Dobia 2”, it is interspersed again after five and a half minutes in “Dobia 3” and after 11 minutes in “Dobia 4” – it is something like a leitmotif, but always meaning something different. “Dobia 1” even ends with a classic 12-bar-blues scheme (again with an allusion to “Master of a Small House”).

So why is it ambiguous if the artistic conception and the playing are so magnificent? The stage seemed to be in an open café and the IX Dobiarteventi festival booked Brötzmann for the opening event which is usually full of people - but only one half came to listen to Brötzmann while the other half came to have a chat or a drink there. The street and traffic noise (especially in “Dobia 2” and in the more quiet parts of “Dobia 4” where you can even hear scooters drive by) are really annoying (actually almost unbearable), but even worse are the people talking while Brötzmann is playing. I have no other words for it – it is simply disrespectful. Some listeners even try to shush the talking crowd down because the conversations are almost louder than the music!

The music on “Solo at Dobialab” is marvelous, I would rate it with four and a half stars. But the noise is a real bummer, the album sounds like a bootleg (one star), that’s why it is rated rather badly. Yet, if you don’t care about the noise, you will definitely enjoy it.

The CD is released in a digipack version with artwork from Brötzmann himself. You can hear Peter Brötzmann on tenor sax, alto sax, tarogato,  and B-flat clarinet.

It can be bought from instantjazz.com.

Listen to a sample of the album here: