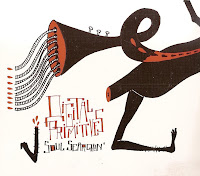 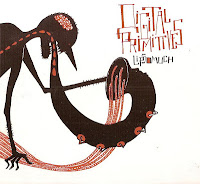 For those who do not know : The Digital Primitives are Assif Tsahar on sax, Cooper-Moore on his self-created diddly bo, twinger, mouth bow, fretless banjo and Chad Taylor on drums.Their two previous albums are also easy to recommend, the first self-titled CD and , "Hum Crackle & Pop", which was released four years ago.

This is a trio to experience in a live setting, but this double album captures their art extremely well. It is one long rhythm fest with soaring sax, indeed building on everything that's primitive in us, but then in the best sense of the word, no nonsense, no polish, no self-glorification ... but the raw and fun enjoyment of rhythm and soloing.

It funks, it blues, it jazzes, it weeps,  it crazies and it mads, it hollers it stomps it shouts it screams. It souls it rants it explodes it suprises it sings it trances it dances.

It captures the essence and even the raw reason of music to begin with, the communal joy of totally free communion with sound and rhythm, to go beyond the self and interact with the senses and emotions and some thinking and then go beyond what is known, in a free act of joint creation, hear and see something come out of nothing, and then feel that unnamed thing inside you physically laugh. That primitive!

And man, can they play!