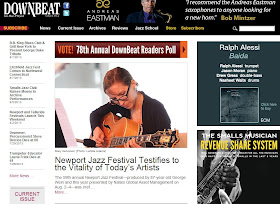 Every year, Downbeat, the leading jazz magazine, has a readers poll and a critics poll to nominate the best bands, the best albums, the best musicians by instrument, the best labels, etc.

You can vote too : here is the link.

I was shocked out of my senses when I read the suggested names for each category. True, Downbeat is an American magazine, and their nature is more mainstream than progressive, but even then, when you look at the list of musicians suggested, it gives the impression that outside of the United States nothing of value is produced, neither by musicians nor by labels. Roughly the calculation is that 90% comes from the US, the rest are some scraps taken left and right for reasons of diversity (I hate the word, it's the opposite of quality).

Just to give you some idea of the categories :

Musician Of The Year : 64 suggested musicians, with 3 non-Americans (Anat Cohen, Hiromi, Rez Abbasi) who all happen to be based in the United States. Vijay Iyer and Rudresh Mahanthappa are both US citizens, despite their Indian ancestry.

Big Band Of The Year : 52 bands, with 7 bands from outside the United States.

Jazz Album Of the Year : 127 albums, of which 13 are by non-US nationals (but again, with Mahanthappa, Ivo Perelman as clear US residents).

... notice too that most non-Americans are typically on ECM.

Trombone players of the year : 49 suggested musicians, of which 4 are non-Americans.

Tenor saxophonist of the year : 56 names of which 8 non-Americans.

Drummers : 53 names of which 3 non-Americans

Composers : 66 names of which 2 non-Americans

Piano players : 54 names suggested of which 9 are non-US citizens

Trumpet players : 53 names of which 12 are non Americans.

I could go on for all categories, but I guess the message is clear. Is Downbeat blind, ignorant, or deceiving its readers?

- either Downbeat should rename its poll into : "78th Downbeat Readers Poll Of US Jazz Musicians"
- or evolve into a less US-centric attitude
- it could also be that Downbeat is totally unaware of what's happening outside the United States, in which case we'd love to invite them to Europe, Japan, Australia and other places with a vibrant jazz scene. Being ignorant of what's happening of real value in its core competence, is really bad, I would think.

We are not against the names of the musicians suggested by Downbeat, but a more knowledgeable list would have served their readers' interest and would have been more balanced in terms of actual musical value. Readers should know what's of real value, rather than getting a list of the name of friends.

The very nature of jazz is that it's universal. Most musicians and bands referenced on this blog are playing with like-minded musicians from around the world, regardless of nationality. Quite to the contrary, they actually look for new collaborations, to push boundaries, to have refreshing new ideas and challenges.

It's shocking that a leading jazz magazine has such a parochial attitude, in total conflict with the genre's essence.


Has Downbeat never heard of ..


... to name but a few ... yet all musicians who delivered stellar music last year ... and I'm missing a lot of musicians, including US musicians who were probably too good or progressive for Downbeat to include .... where are Nate Wooley and Peter Evans? Kirk Knuffke? Where is Ellery Eskelin? Hamid Drake?


... and my personal apologies if I have not mentioned all great musicians. This was a fast reaction to François Carrier's post on Facebook, who is luckily mentioned among the non-US sax players (congratulations François, a real feat!).

My proposal : if you vote, vote for the great musicians for whom any group identifier is meaningless, go for musicians with open minds, open hearts, open visions on how individuals can collaborate to create new and captivating and international collaborations.