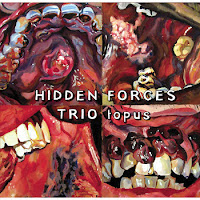 I sat down to listen to this disc with some trepidation. The Bruce’s Fingers’ June update had described the musicians, from Seville, Spain, as also having “parallel existences in the world of heavy rock, doom metal, gothcore [or whatever the appropriate term is]”. Matters weren’t helped by the painting on the cover – a dental nightmare – or some of the track titles: El hijo secreto, no el bastardo (the secret son, not the bastard) and Panza de azufre (sulphur belly). I was expecting music full of adolescent angst, but it turned out to be rather different. As the adage has it: never judge a book by its cover.

Gustavo Domínguez (clarinet, bass clarinet), Marco Serrato (double bass) and Borja Díaz (drums), play composed and improvised music. The composed material has a folkish touch, wistful and plangent. After an initial free jazz flurry, the title track is a faintly Moorish melody, over loping bass, which gradually descends into the lower registers, as the bowed bass and bass clarinet explore a darker version of the theme.

In Porque no llueve, los santos peregrinarán de espaldas (because it doesn’t rain, the saints return to the pilgrimage) an attractive melody is first played gently on bass, repeated on clarinet, and then in outline on drums (but for rather too long). The remainder of the piece is thoughtful – but at times borders on the soporific – and I would have liked to have heard playing with rather more concision, and a touch more gusto.

On the whole, the improvised material is rather disappointing.  El hijo secreto, no el bastardo runs out of steam with an over long and rather aimless drum solo, unreprieved by accompaniment from the bass and later, clarinet. Las colinas (the hills) is somewhat diffuse, and lacking in character. There are some interesting textures, but it sounds a little like improvising by numbers.

The trio seems to gel in the final track – La novia del chivo (the kid’s girlfriend) – rolling drums and pulsing bass with rather more brio in the clarinet, but it’s short-lived, as the piece comes to a premature close after two minutes. Curious.

Something of a mixed bag, therefore. Over the album, rather too much of Domínguez’s work on clarinet consists of scalar-like runs and arpeggios, but often not a great deal more. I can’t help but feel that the trio simply needs to play together more, and take a more critical view of its material. Maybe some angst would help.