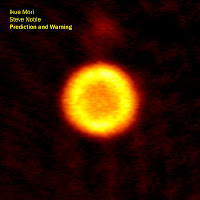 Advances in computer technology have allowed electronic sounds to be generated and modified with ever greater sophistication: an eclectic mix of musical pitches, field recordings of objets trouvés, and clusters of novel textures – combined with a frequency range from the subterranean up to the barely audible – often heard simultaneously or in rapid-fire succession. (Am I alone in wondering how this vast array of sounds is achieved by someone sitting at a desk in front of a laptop computer, or a table strewn with wired together boxes?)  Such immense diversity can be used in a positive way – to confound our expectations – but the absence of fixed references can also result in a sort of aural disorientation: one cannot listen in a continual state of surprise. Electronics also tend to lack the expressive, often subtle, phrasings and inflections that are part and parcel of playing an acoustic instrument, with which our ears are so familiar.

In consequence, purely electronic music is often in danger of becoming rather homogenised and monotonous – paradoxically, sound without limits can end up sounding terribly limited. For this reason, in an improvising context, they tend to work best when in a dialogue with regular instruments, even when those in turn are subject to electronic transformation. In this recording, Ikue Mori (electronics) and Steve Noble (drums, percussion) take full advantage of their respective resources, to produce a thoughtful montage of the unexpected and the familiar, which retains interest throughout.

One of the ways this is achieved is by exploring contiguous areas of the sonic spectrum – points of contact between different sounds, textures and rhythms, and where they overlap (the idea is, in fact, at least as old as Stockhausen’s Kontakte for electronic sounds, piano and percussion, from 1960). Cymbals produce a rich series of overtones, and during the first piece, Seismic Waves, Mori draws attention to this by adding splashes of distorted cymbal sound, merging into white noise, so as to make it sound as if Noble’s cymbals are taking wing. The next piece, Montparnasse Derailment, is a duo between electronically generated rhythms, and actual percussion, acoustic and electronic beats and pops overlapping and intermingling. (Tokyo born Mori started to play drums after she moved to New York in 1977, and in the 1980s experimented with drum machines.) Elsewhere, Noble’s crisp chimes and drum thwacks are met with facsimiles of those sounds. On other occasions – such as the opening to Inferno – it is unclear precisely who is responsible for what in the overall texture.

This is not an arid exercise in sonic exploration, however, and Mori extends her electronics beyond the merely imitative. She conjures up some wonderfully rich colours, such as the thick, smeared chords in Combustion, heard over Noble’s totemic drumming. She avoids one of the pitfalls of electronic music – sounding like a child let loose in a candy store – by restricting her palette when the need requires. In Land of Famine, Noble scrapes out long resonant sounds on metal percussion, while Mori intersperses soft sounds played in reverse – decay moving to attack – followed by quasi-gamelan bells, fading in and out as if from a dream. Similarly, Noble’s contribution is often limited to simple, vaguely ritualistic drum figures, most dramatically in Black Death (Steve’s March), during which he beats out a relentless military march on his snare, then whole kit, followed by cymbals only, surrounded by electronic swarms swooping in various – sometime contrary – directions.

One thing computers can to do better than humans is extremely complex or accelerated patterns. In Convection, rapid, zigzag sequences keep bubbling to the surface; and during the latter part of Land of Famine,Mori builds layers of repeated figures – each proceeding at a different speed and subject to separate treatment – which gradually quicken, expanding like the tendrils of a plant in accelerated motion.

This is the sixth release from the recently formed Fataka label, which is building a refreshingly diverse catalogue, all of which can be recommended.


The album can be bought from instantjazz.com.