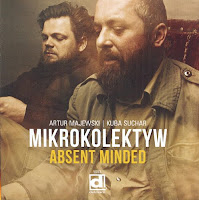 Just stepping from a plane coming from Warsaw, Poland, on a business trip, without having had the chance to see anything of the vibrant Polish jazz scene. Too bad! Luckily I saw this great Polish duo in concert some weeks ago in Antwerp. Artur Majewski plays trumpet and electronics, and Kuba Suchar drums and electronics. They are the first foreign artists to release albums on Delmark, the Chicago Jazz & Blues label.

I am not sure whether that's the reason, but both musicians have been touring with "Delmark musicians" such as Nicole Mitchell and Rob Mazurek, with whose Exploding Star Orchestra and São Paulo Underground they have been touring.

They appear on this blog with their debut album, "Revisit" (Delmark, 2010), and we find Majewski as a member of Foton Quartet with the exceptionally good "Zomo Hall".

What they perform here, is also good, again with musical references that go back to Don Cherry, with great joyful passages, with the modern-day influence of Mazurek's musical vision. This album is better than the previous one because of the quality of the compositions and improvisations, and what is even more important: the electronics have been mastered and subdued and have become functional in the overall sound, rather than just being a technical gimmick that boys like to show off with.

Some tracks appear to be purely acoustic, like the fantastic "Crazy Idea Of Jakub S." or "Little Warrior" with its crazy rhythm that reminds me of a Tom Waits track (but which one?) and with a trumpet part that reminds of Mazurek, other parts have more electronic influences, like the long and beautiful "Dream About The Mind Master", others are indeed almost Don Cherry tributs like "Sonar Toy", playful and joyous and somewhat African, and "Fossil Stairway" is both compelling and irritating.

It is indeed varied, and despite all the references mentioned above, the duo has its own voice, one that is more explicit than on the previous album, with all tracks of high quality and lots of ear candy ... both musicians play well and interact well. Despite the limited setting of trumpet and drums, Majewski and Suchar create a strong and exploratory album, that is equally welcoming and warm.