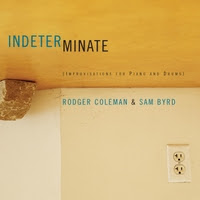 Pianist Rodger Coleman and drummer Sam Byrd's collaboration is an energetic and succinct recording. Clocking in at a mere 35 minutes, there is not a scrap of waste on Indeterminate (Improvizations for Piano and Drums).

Captured live at the Zeitgeist Gallery in Nashville, near where pianist Coleman is based, Indeterminate is a vibrant document of the collaboration between Coleman and Byrd, who have worked together in other combinations in Boston and New York. This concert recording is captured nicely, you can hear the attack of the percussion balanced with with the fury of the piano, it's dense music, but not without space.

Coleman's playing has elements of Cecil Taylor's approach, like in the percussive tonal clusters and strong rhythmic drive, all connected by tight melodic runs. Byrd, who seems to have integrated a rubber duck into his kit and is not shy about squeezing it, gives Coleman more than enough support to build on. Or, maybe it's the other way around, where Coleman's intensity provides Byrd with space to explore and rhythmic ideas to push around.

Towards the end of the short recording, Coleman works over and over a small melodic invention, and suddenly, sprinkles in some musical quotes. It's a wonderment how a quick refrain from St. Thomas sticks out, like a shiny object in the musical maelstrom. Overall, the music is exciting and the relative brevity of the recording is a strong point too, not letting the music run out of steam. An enjoyable listen.