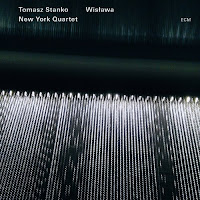 For fans of trumpeter Tomasz Stanko, this double-CD release is a welcome treat.  And for those who haven’t yet sampled the riches of this veteran of European creative jazz of the 1970s, this recording would be a great place to begin.  While Stanko has mellowed just a bit with age (although he still has some fire to his playing when the occasion demands it—see below), he remains a searching, dynamic player who is always guaranteed to produce memorable music.

Part of the key to the success of this recording is the new group Stanko has assembled, consisting of pianist David Virelles, bassist Thomas Morgan, and last but not least drummer Gerald Cleaver, who’s seemingly been playing with everyone these days, as his long list of recordings seems to grow by the week.  Stanko has always chosen well in selecting his musical partners, and these guys continue that legacy, as they’re able to anchor the music in subtle and gentle ways, something particularly essential for the gorgeous ballads that are now Stanko’s stock-in-trade.  The album’s title track, “Wislawa,” for example, is built around a breathtaking but very deliberately-paced tune.  Only a group committed to putting the beauty of the music before their own egos could offer the support needed to make this music really sing, and Virelles, Morgan and Cleaver are certainly capable of it.  But what separates this record from some of Stanko’s more recent work is that these players are also willing to stir things up a bit—by injecting some energy and drive to a number of the tracks.  And in the process, they spur Stanko to some of his punchiest playing in recent years.

Take, for instance, the second track of the album, “Assassins,” which begins with a relatively straightforward post-bop head, only to quickly morph into a groove-driven off-meter vamp that allows Stanko to take his horn into the upper register for some truly invigorating playing, while the rest of the group keeps things going with a feisty rhythmic charge.  Or for another example, “Faces,” near the end of the record, provides another glimpse of the quartet working together on another upbeat number, which again coaxes more spirited playing from Stanko and the others as well.  Along the way, Virelles, Morgan and Cleaver strike the perfect balance between order and freedom, as they support Stanko unfailingly, but not in a confining way.  Especially on the more up-tempo tracks, there’s more than enough openness to allow Stanko’s bandmates to explore their own ideas independently, as they do brilliantly on “Shaggy Vandal,” where after several minutes of fantastic group interplay during the middle of the track while Stanko takes a breather, the trumpeter just can’t help himself, and eagerly jumps in with some passionate contributions of his own before it’s too late.  Special credit should go to Gerald Cleaver as the rhythmic center of this group, as his diversity as a percussionist is really showcased to fine effect here.  When providing soft brushwork on some of the ballad tracks, Cleaver is as understated and careful as one could hope for; but when it’s time to let loose, he brings a muscular presence that allows the more adventurous tracks to take flight.  Hearing such a forceful and unpredictable drummer work with Stanko is one of the special delights of this record.

As a document marking the continuing legacy of one of the legends of improvised music--still going strong in his eighth decade!--this is a very fine release.  And with Stanko’s new colleagues continuing to inspire his creativity, here’s to hoping that there will be many more to come.