We're being spoiled again, us lovers of trumpet and piano duets. Earlier this year Brian Groder and Tonino Miano released "Fluidensity", last year Satoko Fujii and Natsuki Tamura released "Muku", and now we get even more. Most of these albums share the same common features of chamber jazz, offering a kind of eclectic mix of classical music with jazz, a light romantic sensitivity, often with reduced nervous tension, stripping jazz of its hyperkinetic dynamics, shifting the mood into a more cerebral, contemplative one, which requires serious listening, because notes and interactions are precious, not sprayed around in abundance, no, quite to the contrary, they are rather selected with precision and care, and worked into clear tones and stretched notes, shimmering over sparse piano chords.

So, I know that musicians absolutely hate to be compared with other musicians, and definitely so if the approach sounds similar, yet is of course totally different. I apologise for that. Thomas Heberer on trumpet and quartertone trumpet, and Achim Kaufmann on piano, go back a long way. They studied together, played lots of music together, then moved in different geographical directions, now meeting again for a fantastic album. Most tracks start with some idea of what is going to happen, yet then both musicians turn the material into fabulous excursions of calm nervousness, or restrained tension, really going beyond the boundaries of genre or style. Is this jazz? Is this modern classical music? You can wonder.

What you know is that each piece has its own precise musical character, sometimes moody, sometimes joyful, often both at once, sometimes contemplative and sometimes jubilating. What you don't get is repetition, patterns or other solid foundations to stand on, what you get is permanent surprise about what's going to happen, wondering which ways the notes will go, and strangely enough both musicians know, because they move together as one, away from your expectations into new realms of wonder. You can wonder how the notation took place. Yet they explore, they take a journey in their own music, building on the ideas, and expanding them, keeping the original character all the time.

The result is one of refreshing drama, clever sensitivity, precision in rawness, disciplined invention, and this with a broad and open-minded vision on music.

The most amazing thing about the album are the incredible varietiy of ideas, the shifts and changes, and the overall coherence. Of all the albums reviewed in this post, it is without a doubt also the most adventurous, going at times sonically beyond the natural voicing of each instrument, yet without overdoing it.

For sure one of the most interesting albums of the year.


We've reviewed Italian trumpeter Mirio Cosottini before, with EA Silence, on "Flatime" and "Cono Di Ombra E Luce", and with pianist Tonino Miano (again!) on the equally excellent "Cardinal", the latter two albums getting both a five-star rating. Cosottini and Miano had one duo album before, "The Curvature Of Pace", which was quite avant-garde stylistically.

Not so with this one. The two superb musicians give us references to the cool jazz of the 50s, both sonically and harmonically, yet they transform the grammar into today's mode of speech, while adding the eclectism of modern classical music and elements of free improvisation. The approach is calm, minimal, with incredible attention for tone and pace.

As they write in the liner notes "From strictly notated ideas, to graphic scores, verbal suggestions to one another, but always with only one condition in mind : to avoid binding the sound with a specific stylistic gel. That is why, in our opinion, the music is both "out" and "in", "lyric" and "harsh", "smooth" and "coarse", "linear" and "non-linear", it is the act of orbiting the object of our investigation and gaining new perspectives at each passing". Lots of contradictions? The absolute essence for great music.

Some pieces are so beautiful that it hurts. 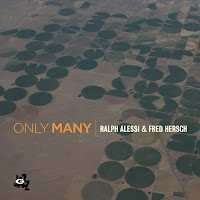 Two other absolute masters of progressive jazz are Ralph Alessi on trumpet and Fred Hersch on piano. After having played together for many years, they release their first duo album, bringing a set of fourteen tracks, of which two covers, Thelonius Monk’s "San Francisco Holiday" and Paul Motian’s "Blue Midnight".

Alessi and Hersch have a kind of natural musical fit, both being extremely gifted on their instruments and with an exceptional ear for interplay, with lots of reverence for jazz tradition while pushing this heritage into today's context without pushing it too far. Their music remains accessible to wide audiences - although that's also relative. It would be too easy to categorise the music on the album as romantic ballads - which they are essence - but both musicians are way too clever not to make this interchange captivating and interesting, developing the themes and structures into sensitive improvisations, full of melancholy beauty, and sometimes even adding some fun into the process, like on "Some Digging In The Ground", or on the playful Monk composition.

Not specifically of high natural interest to the readers of this blog, but lovers of great musicianship 'tout court' will love this. 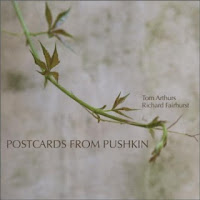 In continuation of "Mesmer", their first collaboration, Tom Arthurs on flugelhorn and Richard Fairhust on piano, bring their sonic aquarels, now inspired by the literature of the great Russian poet Alexander Pushkin. The music has this tranquil approach that mixes jazz with classical music, even ridiculing genre definitions completely. The music is fragile, romantic in its sensitivity but modern in its lack of explicit themes and structures, like floating abstractions, and the quality of the playing is excellent.

Can be listened to and downloaded from Bandcamp. 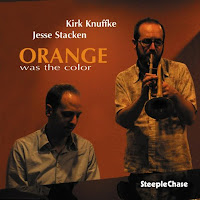 One of the downsides of this blog is that we get far more CDs than we can ever review, even with a great team of passionate contributors. This one fell through the cracks of our review system two years ago. And not surprisingly in a way, considering the more mainstream approach of both artists. After having covered the music of Ellington and Monk on "Mockingbird", and other jazz luminaries on "Like A Tree" (with Kenny Wollesen on drums), Kirk Knuffke on cornet and Jesse Stacken take on the music of Charles Mingus, in a kind of setting that sounds unnatural for the bassist's music, yet it does work somehow, offering an excellent performance and an interestingly fragile rendition of Mingus' physical music, elucidating elements that you would not have expected in the originals.


Some of those albums can be purchased from Instantjazz.