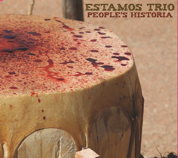 One of my favorite non-fictional books is Howard Zinn’s classic “A People’s History of the United States“, which tells American history from the perspective of the ordinary people. The first chapter about “Columbus, the Indians, and Human Progress” counters the still wide-spread notion of Columbus as the noble conqueror and proves him being a slave trader and murderer. The book begins with the words “Arawak men and women, naked, tawny, and full of wonder, emerged from their villages onto the island's beaches and swam out to get a closer look at the strange big boat. When Columbus and his sailors came ashore, carrying swords, speaking oddly, the Arawaks ran to greet them, brought them food, water, gifts.”

For his new recording "People's Historia" Thollem McDonas has reduced his larger Estamos Ensemble to a trio, consisting of himself on piano, Carmina Escobar on voice and electronics, and Milo Tamez on percussion. The twelve songs are named after the numbering of the Arawak (apart from the title this is the obvious connection to Zinn) because they are losing their indigenous language since young people and children are not able to use it in their everyday lives and the result is that a crucial part of their culture is destined to disappear, a fact McDonas wants to bring to people’s conscience.

Estamos (the ensemble and the trio) consists of American and Mexican musicians, the word is the Spanish verb for “we are” in a non-permanent sense and it reflects the ever changing nature of music in general, or – as William Parker put it in the liner notes: Composition is freedom and out of the woods comes this lonely melody that doesn't recognize itself in the mirror because every time it is played it looks and sounds different. The tradition was originally about individuality not preservation. It was each musician's job to find his or her own voice... Then acknowledge that each individual voice was part of a larger cosmic voice. So be healed by this music. "

The music on “People’s Historia” is natural, adventurous and peaceful, yet fragile and endangered, like the existence of the Awarak. On tracks like “Aba”, “Abadakabo” and “Biandakhabo Diako Kabyn” Carmina Escobar’s otherworldly voice, which is the sensation of the album, sounds like a haunted ghost coming directly from the Caribbean jungles. Mc Donas’ piano, which accompanies her in a very dissonant manner, even enforces this spooky effect. In general, the onomatopoeic and fragmented music swings to and fro between echoic sounds (e.g. in ”Bianitian”), McDonas’ European classical music influences (especially Debussy) and sparse electronics and field recordings that reflect the Caribbean world (“Biandakhabo Diako Abaro”).