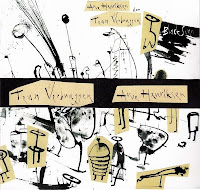 I just came across this hard-to-get album recently, and it deserves attention only because Arve Henriksen (Supersilent) plays on, and then with together with Teun Verbruggen (Othin Spake), my fellow compatriot and drummer with open-minded progressive musical tastes.

Although the concept is not new (check David Sait's "Postage Paid Duets"), the album was made by both musicians separately. Arve Henriksen first recorded his trumpet parts at home, in February 2010, together with some hardanger fiddle, vocals, samples, keyboard and snare drums. Teun Verbruggen recorded his part in a studio in September of the same year. Then the whole thing was mixed and mastered.

Fans of Arve Henriksen will not be deceived, but they won't find anything new either. The music is ethereal at times, without substance, like mist or wind, hard to grasp but pleasing nonetheless, with Verbruggen's percussive parts adding some raw contrast to it, like sharp rocks breaking a beautiful horizon and offering depth and perspective. Other pieces, like the title track, are more dynamic, full of rhythmic complexities mixed into the final sound, like you can expect from several layers of sound and electronics superimposed.

In contrast to trumpeters like Mattias Eick or Nils Petter Molvaer, the duo is more adventurous and dares to go beyond easy sounds. Despite this, there aren't too many surprises either, and that is really something we would expect from two creative minds.