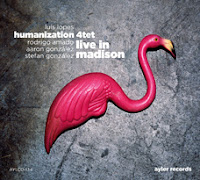 Luis Lopes' Humanization 4tet caught my interests a while back after I read a review of their eponymous first album. Indeed, as Stef described, the group still possesses a straight forwardness, backed up by raw intensity and sharp technical skills. Live in Madison was recorded in Madison, Wisconsin at the end of a US tour that the 4tet did in support of 2010's Electricity. The recording's sound is great, capturing the dynamics of the group perfectly.

The opening track 'Bush Baby' begins with a tension filled blast of sound over a repetitive bubbling bass and drum line. Lopes wields the guitar with abandon, playing cool melodic single note runs and ramping up to some knotty chordal passages. Sax player Rodrigo Amado digs in on track two, 'Jungle Gymnastics',  where after a quick set of unison lines with Lopes, the tunes becomes a barely contained rumpus with each throwing around shards of sounds -- rhythmically free and brutally melodic. Drummer Stefan Gonzalez and bassist Aaron Gonzalez provide a tight groove on 'Two Girls' giving Lopes a chance to to spin a dangerous solo. Amado's sax intertwines with Lopes' guitar mesmerizingly. Along with the hard hitting bouts, there are glimpses of beauty, like the stately solo bass beginning to track 3, 'Long March for Frieda Khalo'.

At times, the concise and energetic themes are reminiscent of intense groups like The Thing or Acoustic Ladyland, though the Humanization 4tet is a bit more complex and less post-punk. Live in Madison is a great companion piece to the Humanization 4tet's slim but solid discography.