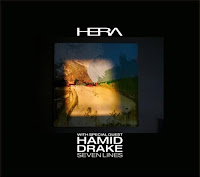 Germany’s standard work on jazz, Joachim-Ernst Berendt’s and Günther Huesmann‘s “The Jazz Book”, claims that in the last 20 years jazz has become world music, a hybrid. Of course, jazz actually has always been world music since New Orleans was a cultural melting pot of nationalities, races and cultures, but in times of migration and globalization jazz has indeed established as the improvised music between the cultures more than ever before. Today, in our interlinked world, music of the most various, overlapping, different, even competing styles has been colliding. Moreover, you don’t even have to be from – say – India to play ragas, you can find great – in this case – raga musicians almost everywhere (especially in the big cities). And many of these musicians speak of themselves as members of the jazz community.

An excellent example of this theory is Hera, a Polish band consisting of Wacław Zimpel (clarinet, bass clarinet, harmonium), Paweł Postaremczak (soprano and tenor saxes, harmonium), Ksawery Wójciński (double bass) and Paweł Szpura (drums). They have always been one of this blog’s favorites, Stef has rightfully talked of their debut album and “Where my Complete Beloved is” in glowing terms. But while these albums, which were recorded with a completely different line-up, are either clearly in the Coltrane tradition or knee-deep in Zydeco (or both), Zimpel and his collaborators try the big strike with this release, which is why the band has expanded and is now augmented with Rafael Rogiński (guitar), Maciej Cierliński (hurdy-gurdy) and American master percussionist Hamid Drake.

“Seven Lines” includes Polish folk songs and Jewish klezmer (something you might expect when you see Zimpel and Rogiński in the line-up) but also music from the Far East, Sufi chants, blues sprinkles, African funk or free jazz elements.

Especially the harmonium and Maciej Cierliński’s hurdy-gurdy provide for a very oriental mood in “Sounds of Balochistan” before a repetitive blues riff comes up so that the reeds can kick off melancholic lines and the guitar can add shredded intersperses. Even here they have got you, from the very beginning the music develops a vibrating, vortex-like quality, it overwhelms the senses with an almost psychedelic force. The rhythmic propulsion provided by the double drums reinforces the trance-like, hypnotic character of the tracks, there are so many magical moments in this music, it is an omnipresent experience of sound, rhythm, atmosphere and melody, it takes you by the hand and leads you to a musical Garden of Eden. Just listen to the mourning interplay of the reeds at the beginning of “Roofs of Kyoto”, the meditative spirituality of Drake’s voice in combination with the drums and the harmonium in “Temples of Tibet” or the funk groove outro of “Afterimages” which can match with Drake’s Wels quartet (with Brötzmann, Gania and Laswell) on “Long Story Short”. 2013 has been a very good year for the music we love so much, there have been lots of brilliant albums so far. “Seven Lines” is definitely among them.

The album was recorded live at Manggha during Krakow Jazz Autumn Festival on Nov, 1st, 2012 and is available on CD.

From the start of this blog, I've always been reluctant to change the recognisable format of having (short) CD reviews, as a kind of heads-up to fans of the genre of what might be worth looking for. Readers and colleagues had asked me to also include interviews with the musicians, or with the labels, or to have more general texts on the free improvisation and avant-garde jazz.

So I find myself violating this rule now, by starting a chat with Wacław Zimpel on Thursday last week, resulting in this short yet insightful interview.

What does the album's title refer to?

Wacław Zimpel : The title refers to lyrics of the Seven Line Prayer - a buddhist prayer to Guru Rinpoche-Pandmasambhava, which is a very important prayer in the Dzogchen tradition. I heard this prayer for the first time when I met Hamid Drake in 2010 at the Lublin Jazz Festival in Poland. We played a double bill gig then. He played a beautiful set with Pasquale Mira and he sung the Seven Lines Prayer accompanied by his frame drum. It was so beautiful that it stayed with me. The same night we played a long jam session with Hamid, getting the feeling of receiving an initiation into deeper forms of music. With this energy we went to Poznan and we recorded "Where My Complete Beloved Is" our second album. That's why I asked Hamid to sing this prayer one more time with us. After that I decided that "Seven Lines" would become the title of our third CD, also because our band had become a septet.

Indeed, why would you add new instruments to the band, if the previous albums were so successful? Why change a winning team?

Wacław Zimpel : The idea of adding people to the group started with the second CD, which already features Sara Kałużna on tampura and Maniucha Bikont as guest musicians. Later on I started a concert series in Warsaw called "Hera at Skład Butelek", which refers to the name of the jazz club. The idea was to play every Friday with Hera but with invited musicians. Thats how we started playing with Maciej Cierliński on hurdy-gurdy. Guitarist Raphael Rogiński also used to show up during those sets, a musician I've known for a very long time and with whom we've had many projects.  At that time I started writing music which really needed more instruments. I especially needed and independent drone that would allow me to build  sax and clarinet lines over it. The hurdy-gurdy was perfect for this and together with the drone itself, Maciej plays beautiful lines on the instrument, so I could compose three voice structures over bass and drums. The hurdy-gurdy is a string instrument with a bow, so we now had a string section with double bass and wood wind section. It gave me a lot of possibilities. The larger band and the new instruments allowed for repetitive structures and a natural way of exploring sound possibilities and different forms.

What was the prior musical preparation with Hamid Drake? Did he just join or did you rehearse?

Wacław Zimpel : We met Hamid  several times between Lublin and Krakow. All those meetings were very powerful for us and for our music. He gave us much wider perspective of creating the sound. So when it become possible to play with him at the Krakow Jazz Autumn I was very happy. I wrote pieces for this large ensemble. We did two rehearsals one day before the performance and one during the soundcheck. We ate dinner together and had some wine which was probably as important as rehearsals!

This album sounds like a travel around the world? Why this global perspective?

Wacław Zimpel : I have been very interested in many different musical traditions for a very long time. I go very often in dialogue with old traditions as gagaku, carnatic music, gregorian chant, gnawa... It is part of my daily musical life. And somehow all these influences manifested themselves at our concert with Hamid. It was much more of a natural flow than an actual plan.

Both the review and the interview were very well done. I hope the review/interview format can be revisited often.

Thanks Tim, we'll keep reviewing albums, but will add the voice of the artists if needed and if possible.
stef

thanks for the in-depth review and interview. it's an amazing record indeed.

My first CD of Hera came after I read the recommendation from Multikulti boasting the 5 stars from “the improvised music most important medium in the world: freejazz-stef”. From that moment on I’ve been a follower of Zimpel and Hera. And your regular reader as well! “Seven Lines” is a beautiful recording, which surely deserves its 5 stars. Thank you for the re/inter-view. I would also recommend another, extended interview with Wacław Zimpel (translated into English) published in 3 parts here:
http://jazzalchemist.blogspot.com/2011/12/interview-with-waclaw-zimpel-part-iii.html
Not many musicians are able to talk about their art in an interesting and insightful way, Zimpel truly is. It may have something in common with his ability to build up the music, creating the experience in which we entirely give up ourselves to following the sound and the silence. Awesome!

Please note that the sax player is Paweł POSTAREMCZAK.

Hi Dobrodziej, thanks for the compliments, suggestion and rectification.