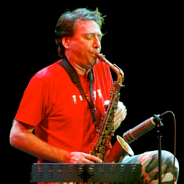 In May and July I had the opportunity to watch Wynton Marsalis and John Zorn, maybe the two most prominent figures in jazz in the last 20 years, live with some of their bands. Marsalis played Karlsruhe with his Lincoln Jazz Center Orchestra and Zorn played the Moers New Music Festival with several of his projects (The Dreamers, Electric Masada and Moonchild, among others). I saw both of them some time ago (Marsalis in Hamburg in a great performance in which he played a lot of New Orleans stuff) and Zorn with Naked City (twice) and with Masada – all three gigs were absolutely fascinating. Now the Marsalis Orchestra was – frankly speaking – disappointing (especially the Monk and Coltrane adaptations were boring) while Zorn was still outstanding - fresh and adventurous. It was pure fun just to see him sitting on his haunches at the edge of the stage watching his “babies”, absolutely concentrated, pure electricity, pride and enthusiasm in his eyes. The icing on the cake was his performance with Electric Masada, when he joined the band on the saxophone (start at 13 minutes and watch the second part of this excerpt from the Zorntag in Moers and you know what I mean). The audience literally freaked out. It is incredible that it is the man’s 60th birthday today, he looks like a 40-year-old.

Over the course of this week, we'll be reviewing some of his latest releases. Today, we begin with Dreammachines.

Happy birthday, Mr Zorn, we are looking forward to the next 60 years.