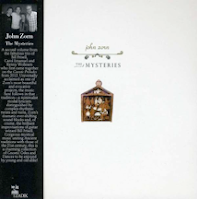 In 2012 John Zorn engaged Bill Frisell (g), Carol Emanuel (harp) and Kenny Wollesen (vib, bells) for his album The Gnostic Preludes, a marvelous record which is part of his series of 21st Century Mystical Music (which is quite obvious when you have a look at titles like Consolamentum, Hymn of the Nassenenes, or Yaldabaoth). Like the first CD the music of their new collaboration has only one goal: pure magnificence! However, it is a much different album. On The Gnostic Preludes Carol Emanuel’s harp was the center of the music, but now it is Bill Frisell's guitar which has taken over the helm - with the result that in spite of all the intimacy and sheer beauty the whole concept is a bit darker than before. While the first track Sacred Oracle starts as if it could have been on the preceding album, the gloomier conception becomes obvious in a composition like Ode to the Cathars, where Frisell starts alone with spooky feedbacks (something which was unimaginable on The Gnostic Preludes) and although Emanuel’s entrance tries to break up the atmosphere, it is only Wollesen’s contribution that finally seem to change it. If he doesn’t really succeed it is because nevertheless there is a weird, constant undercurrent and Frisell wins back the struggle for predominance in this track when he adds distorted guitar lines. Another example is The Nymphs, the album's longest track at nearly 11 minutes. Here Frisell’s playing reminds of post-Morricone-soundtracks. His style is perfidiously delicious and the compositional structure is full of interesting twists albeit its minimal approach – especially when Wollesen uses his bells, Once upon a Time in the West is not far.

The Mysteries is a very exciting follow-up to The Gnostic Preludes, particularly in its details. And again it is pure joy listening to the outstanding interplay of these master musicians.