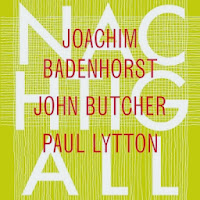 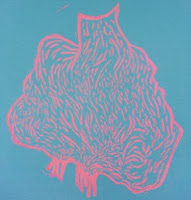 The first two releases on Joachim Badenhorst’s new label Klein showcase the remarkable breadth of the reedist’s musical vision. The first is a trio recording in which he and percussionist Paul Lytton plunge effortlessly into the singular musical world of saxophone mutoid man John Butcher. The second—with the seven-strong Carate Urio Orchestra—may be the best bridge fashioned so far between the language and temperament of modern improvisers and the things the rock world has been dabbling in over the past few decades: namely, post-rock in all its chamber music, ambient, noise, and drone stripes.

“Nikko Blue” starts Nachtigall with a gunshot crack and some seemingly percussive noises that only reveal themselves to be reed instruments after a few moments elapse. Lytton joins in, rifling around in the silverware drawer while Butcher and Badenhorst meld into something reminiscent of Butcher’s Contest of Pleasures work. Throughout, Badenhorst steps up to Butcher’s level, going reed to reed with the master, at times even becoming indistinguishable from the Brit, as in the great exchanges on “Otaska.”

With these three, it’s not surprising that the music involves a nearly complete deconstruction of each instrument, resulting in a world where the possibilities of sound are placed before the assurances of form, where specifics of technique becomes obscure, secondary even, and the actual act of performing begins slipping from awareness. In short, Nachtigall is just good free improvisation—the sort of vibrant, abstruse interaction we expect when we read who’s on the bill.

But even after the exhilarating trio on Nachtigall, Sparrow Mountain can’t help but be the standout. Moving along like one giant sound wave, with peaks and troughs, lulls of mellow songwriting and quiet improvisation punctuated by huge, satisfying crescendi, it strikes the perfect balance between the more abstract flights of improvisation and strong ensemble writing. The long opener “Larvae” materializes as a tentative improvisation, almost as if the players are feeling out the contours of their partnership. Once a rapport is established, they push ahead into Badenhorst’s songwriting, and the piece coalesces into a beautiful, increasingly intensifying motif that reveals their impressive depth of sound. “Germana” juxtaposes sections of spare vocals and guitar with larger thematic pieces that allow the band to really fill out their “orchestra” title. “Comacina Dreaming” is a particularly haunting piece, an almost psychedelic, ambient use of ethereal high pitches that certainly feels as though it’s slid into a world outside of wakefulness, segueing perfectly into the wordless vocal harmonies of “Een Schoon Hemd,” a track reminiscent of Canadian art-rockers A Silver Mt. Zion. A few other tracks also feature vocals, including the absolutely gorgeous “Laglio,” with a melody that would make any number of indie rock bands jealous.

Sparrow Mountain is such a success because it avoids getting pulled into the usual ruts of rock and free improvisation mash-ups; in fact, it takes an altogether different road. There is no shrieking, skronk sax over hard rock jams or wailing, whammy bar-straining guitar solos. Instead, we find a bunch of seasoned improvisers using the explorations of texture and dynamics inherent in improvised music to color in the sketches of Badenhorst’s songs.

Where Nachtigall touches upon the unity of three minds charging blindly ahead into dark new spaces, Sparrow Mountain reflects the unity that can be forged between disparate musical genres, like shifting the circles of a large Venn diagram until that rich, overlapping middle ground is finally revealed. Both are well worth your time and attention, and both are promising, exciting snapshots of Badenhorst’s top-shelf oeuvre.

Listen to “Laglio”:
You can purchase it at Instantjazz.com
Paul on Tuesday, October 29, 2013
Share

I have reading the reviews in your blog for a few years and I think I have never commented anything. Laziness, being in a hurry or simply having not the appropriate words to express ideas.

Whatever the case may be, I read the excellent Carate Urio Orchestra review today and listened to "Sparrow Mountain" through the always wonderful Bandcamp website.

I just want to express my gratitude for the superb work you make writing this great blog, teaching people and discovering real gems for the sake of pure art.

I had never said before and that was unfair: THANK YOU VERY MUCH.
Please keep on writing and listening!