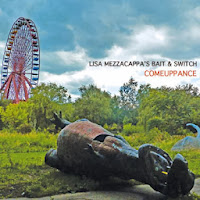 Free jazz. Ever since I listened to the first record that presumably belonged to this genre I have been trying to pigeon hole the core that defines this music. The result has always been me being left empty handed  - maybe the five pointers that Stef has outlined in the left side bar is the closest one can get to "defining" free jazz and this has probably been the foremost reason I find this genre so compelling and magnetic - the very fact that it almost always defies expectations and promises a new ride every time you engage. It is a genre that demands audience participation denying passivity and it is a genre that leaves each person carrying out his own interpretations with those being, more  often than not, something that the artist probably did not intend to provoke. It is that open and hence that "free", I suppose. If I seem to be ranting I apologize but Lisa Mezzacappa's Bait & Switch's Comeuppance seems to reaffirm everything that I have just said - it seemed like an ideal preamble.

For those wanting a quick judgment call or one-line summary - if you liked What is Known then you simply cannot go wrong with Comeuppance, in fact you can revel in all the reasons you liked the former with more fervor and verve for not only are they all here and present in the latter but also better.

Now for the more indulgent - for the purely uninitiated Bait & Switch is a quartet led by bassist Lisa Mezzacappa's ably assisted by Aaron Bennett on saxophones, John Finkbeiner on electric guitar and Vijay Anderson wielding the  drums. The music that the four piece put up is pacy, raw and often nervy with a sense of urgency. Some interesting phrases that I picked up from Lisa's site - "garage jazz", "rowdy collective", "free jazz abandon", "avant-Caribbean groove ". Now here is a very interesting exercise for a listener to indulge in- match the moods/feel  these phrases connote while actually listening to the album and you would conclude that there is nothing more apt one can say about the band (the truest and most pertinent facts are often spoken by the leader!). Although all the tracks have such drive and intensity, they also sometimes have some mellow passages that lend a beauty that one can experience only by listening (4 minutes into Cruciferous, listen to the entire track slow down to a crawl only to erupt into a new tangent). The album closer, (A letter to) Mrs. Alice May Williams, is another shining example where for almost 5 minutes the guitar and saxophone indulge in a dissonant, brooding duet steadied by some tasteful rhythm (often lending micro-solos of their own!) only to coalesce into a wholesome finish driven by some wonderful melody on the horns - by relative standards this is the softest track and poses as a perfect finish to an exciting ride.

I have to honestly admit here that I have a softer spot for string instruments (read also rhythm section, bass and drums!) as compared to horns, more of a personal preference given the solid grounding I got getting to love rock and its ilk. So the presence of Finkbeiner here is the icing on the cake presenting a mouth watering prospect for me. He specially shines in Cruciferous presenting such tasteful and angular tones that shape the entire track. In fact this particular track is perfect example of the juxtaposition of all the phrases that Lisa mentions above - it pretty much is one track that shows it all. Off late for no one reason in particular, I have been listening to a lot of punk and I could not help but draw some parallels with Vijay's drumming. Being a part of the rhythm section for a band that is bursting with such zip and vigor is no ordinary task but he has all the skills and chops required to pull off a masterful show - often frenetic and forceful, he can not only lend a foundation when required but can also single handedly steer the song forward or turn it around on its head. Brilliant stuff. Lisa shines as the leader, especially given the fact that almost all the songs (save for Old and Luna) are her compositions - intricate and structured yet giving plenty of room for her colleagues to improvise.  Needless to mention is her bass playing that is nonpareil - just not the pulsating rhythm she manages to lend with virtuosity but especially some of her solo passages that punctuate the track that are almost ethereal and sublime (Le Crabe, the opener should stand testimony to this). Lastly, I would be amiss if I do not laud the efforts of Aaron Bennett - the man does not seem to be constrained by the fact that the lungs are capable of supporting only a certain amount of air at any given time - his blowing is often so forceful and emphatic that I felt a little out of breath! Las Hormigas Rojas is another favorite tracks of mine that seems to only reaffirm all the strengths of this band in terms of vim and musicianship.

The vitality of the music here is unmistakable and it is so arresting that it seems to grab you by the lapels and demand your undivided focus. With a highly skilled quartet who are so adept at playing off one another and so capable of putting in such high levels of energy the resulting effort can be nothing short of awe-inspiring and Comeuppance is just that and more. The direction in which this genre is headed in terms of evolution is filled with hope and renewed energy with creativity and adventure at the helm - Comeuppance is a fitting tribute towards this journey.

You can purchase it at Instantjazz.