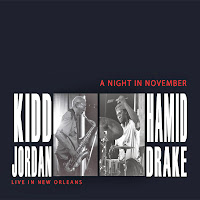 Recorded in Kidd Jordan's own New Orleans in 2011, in front of a small and enthusiastic audience, the great tenorist gets the company of magician drummer Hamid Drake, whose rolling polyrhythmics and dancing lyricism keeps amazing me with every performance. The album contains two lengthy tracks, one more than fourty minutes, the other close to thirty. And as you can guess this is free jazz in its purest form. Two musicians giving their best at improvising till they think they need a break, or the audience needs a break, but otherwise why would they stop, being propulsed forward by their own momentum, by the organic development of their interaction. Ideas flow and bounce back and get shifted in other directions and tempo and mood and intensity, the music stops then restarts and sometimes there are moments when you think the energy disappears, but that's just some silence before both pick up again and move forward, even more frenetically.

It never gets the same kind of variety and intensity as "Palm Of Soul", which is in my opinion one of Jordan's best performances, and in my personal best list of 2006. I also prefer the two "On Fire" releases, with Warren Smith and Harrison Bankhead, because the sound is fuller (and better).

That being said, the album has plenty of its great moments, it's raw and direct and fun and authentic. Two musicians enjoying each other's skills and creating something on the spur of the moment, moving in the same direction while challenging each other.

Listen and buy from Bandcamp.