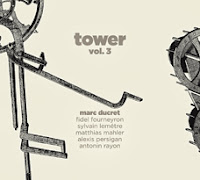 I've kind of lost my way a bit with the Marc Ducret "Tower" series. We haven't reviewed them all here but a quick look on the Ayler site tells me that "Tower Vol.1" must have been out in 2011, followed by "Vol. 2" later in the same year. We reviewed "Tower Vol.4", a solo performance which appeared in 2012 and now we have "Tower Vol.3", which was recorded before volume four! I should add that according to the Ayler website this may not be the end of the story ... more volumes to appear? Most of the titles are re-interpreted over the four albums, although not every one and not the same order on each CD - look at the Ayler website to make the comparison over the four records.

If you've heard Marc Ducret's music before you'll already have a fair idea of what this record may sound like (musically). Over the years he's built up this very interesting mixture of free jazz and atonal jazz rock that gives at times an almost contemporary classical tinge to his compositions. Working with various brass combinations he makes some highly sophisticated modern day fanfare music - obviously a little more complex than your average marching band. I was really struck by one of his earlier releases "Le Sens de la Marche", a very strong punchy record recorded (as many of his records) live with his ensemble of the same name. This album sort of follows in the same vein except here we have no drums, something that you don't really think about until reading over the list of musicians. Ducret has an amazing way of presenting his music, not unlike someone such as Steve Reich, he is able to combine instrument combinations and lines which together make melody out of rhythm. His use of marimba/xylophone/vibes player (Sylvain Lemêtre) adds to the strong pulse of the music, and helps strengthen the almost Zappa-esque atonal type melodic lines. These drive the music but leave space for a soloist(s) to "do their thing", and do it they indeed do!

It would be difficult to pick out 'the' best tracks, Ducret's music just doesn't work like that. However, it is possible to cite a few sections on the album that somehow stand out. "Real Thing #2" (tk2) has some amazing moments (texturally). After fighting through some dense melodic and rhythmic music the band lapses into a fantastic coda, percussion, bells, tambourine (?), vibes, all combine with the long melody creating an almost Sergio Leone type western music full of tension. "Real Thing #3" (tk3) starts off with huge dissonant brass chords which gradually lead us towards a strange section which sounds not unlike these enormous Tibetan brass horns that sound together across the Himalayas. Finally "Softly Her Tower Crumbled in the Sweet Silent Sun" uses silence as a melody. Strongly hit chords are left to fade away leaving empty spaces. Gradually Ducret introduces one of his long dense contrapuntal melodies, brass, vibes, guitar, piano all move around each other ending up in overlapping notes that create dissonant chords like a scene in a horror film, most tense.

From the sound of  Marc Ducret's music I can imagine him listening to Tim Berne and Frank Zappa, but at the same time his compositional approach also has strong elements of 'spectral' music such as that of Jonathan Harvey. His music really seems to dig inside sound itself and yet manages to stay accessible. For anyone interested in jazz, improvised music, rock and of course maybe contemporary classical music this is fine album which I find reveals new ideas and nuances with each listen.

You can  purchase it at instantjazz.com.