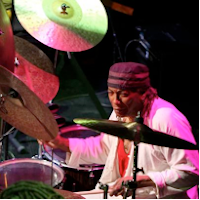 We have just read the sad news that Ronald Shannon Jackson, one of the greatest jazz/rock/funk drummers, died of leukemia in his hometown Fort Worth/Texas two days ago.

Among others Jackson played on seminal albums with Cecil Taylor (3 Phasis, Cecil Taylor Unit, One Too Many Salty Swift And Not Goodbye), Ornette Coleman (Body Meta, Dancing in your Heads), and Albert Ayler (At Slug’s Saloon 1966), in fact he was the only drummer who played and recorded with all these three free jazz giants.

He will be remembered as an incredibly versatile musician who was able to combine free jazz, funk and rock with his band Decoding Society and as a member of the free rock super group Last Exit (with Peter Brötzmann, Bill Laswell and Sonny Sharrock).

Below is a clip with Last Exit at the German Jazz Festival Frankfurt in 1986 which shows a marvelous, energetic, brilliant Jackson in top form. Just watch his drum solo at around 20 minutes – that’s how we will always remember him.

His death is a sad loss.

Thank you very much for all the great music, Mr Jackson.

I am so glad that I got to see him play.
He was such a great musician, and I think that his stature in the Jazz world will only increase as time goes by.

Agreed! Was just doing more RSJ research online today, while listening to his Decoding Society stuff for the millionth time, and tracking down some other stuff of his, new to me. Am noticing how relatively unknown he seems to still be in 2021, and it blows my mind. How can anything so great be so obscure still? Obviously the true jazz folk know him, but...