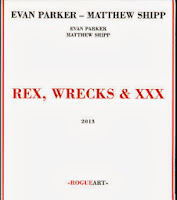 At first sight, Evan Parker (tenor saxophone) and Matthew Shipp (piano) might not seem an obvious pairing, representing rather different styles of free jazz from either side of the Atlantic. But duos are not monologues or group discussions; they’re dialogues that highlight both differences and common ground, with a starkness that casts into relief features of the players’ styles that can be lost or obscured in other settings. Perhaps this is why so many great recordings are of duos: the art of conversation thrown into the spotlight.

And of course, it’s folly to pigeonhole creative musicians, whose imaginations are not limited by labels. This was apparent in Parker and Shipp’s previous recording: Abbey Road Duos (Treader, 2007), a set of studies exploring the fundamentals of their shared vocabulary.

Like a number of Parker’s double-CD recordings, this release comprises a live improvisation (some 41 minutes) – recorded at London’s Vortex – and a studio recording made the previous day, consisting of shorter pieces. In an interview printed in Birds and Blades (Intakt, 2003) – a duo recording with Barry Guy (double bass) – Parker gave the following as one of the reasons why he prefers not to play shorter pieces live, and keep them for the studio:


“… I’m scared to discover whether the audience is really enjoying it or not until it’s over. This periodic interruption prompts an applause rating, I find it difficult to deal with.”

One wonders when Parker last had to worry about his applause rating, but you can see his point: good, bad or indifferent, he’s having to measure up to the audience’s assessment rather than his own.


Although a duo recording, there’s a third (non-speaking) member of the cast: the New York poet Steve Dalachinsky, who wrote the poems printed in lieu of liner notes, which give the tracks their names, and collectively form the alliterative title to the album. I’ll be writing more about him anon when I review his recent release with Joëlle Léandre, but he has associations with both members of this duo. He and Shipp have collaborated on a number of recordings, and the book Logos and Language: A Post-Jazz Metaphorical Dialogue (RogueArt, 2009). Dalachinsky is also an admirer of Parker’s work. His collected Evan Parker poems have been published by Corrupt Press under the title: Long Play E.P. Most were written while listening to Parker play in various settings during a residency at the Stone in 2009, and I assume that the same applies to the poems here: that they are largely real-time responses to what the duo recorded. I’ll say no more about the poems, and focus on the music (readers of my review of the disc with Léandre won’t get off so lightly).

First: the studio recording. This consists of Rex 1 to Rex 6, interspersed with Wrecks 1 and Wrecks 2: solo improvisations by Shipp and Parker, respectively. In Rex 1, after a tentative beginning the two melodic lines expand and merge, like two people meeting in the street, each recognising the other. Here and throughout the album, Shipp displays a wonderful touch and sense and dynamics (it’s no wonder he’s so in demand as part of Ivo Perelman’s recent glut of recordings). Jazz voicings permeate his style, but what is brought to the fore when playing with Parker is his ability to make lightning changes of gear, and to accelerate, reverse, swerve and break. This suits Parker’s atomised phrasings perfectly.

One tends to think of Parker as having rebuilt his style from the ground up, compressing as much as possible into the smallest space; but what is clear in pieces such as Rex 4, is that within this he has distilled some of the essential phrasings and tone of the jazz saxophone. Although his tenor retains its characteristic edge – like carved granite – there are passages where it takes on a decidedly buttery tone. Smooth tenor and sparkling piano runs? I don’t think it’s stretching matters to see Art Tatum’s last recording session, with Ben Webster as one of the antecedents of this duo. Indeed, in Wrecks 1 – Shipp’s solo – the comparison with Tatum is irresistible.

The duo obviously gave prior thought to the format of some of these pieces. Rex 3 is just over a minute and a half of repeated figures on the saxophone and parallel hands on the piano. Rex 5 consists of witty alternations between the two, each picking up the material of the other, like the party game: The Last Word, where each player has to start a sentence with the last word of the previous player’s sentence. The studio session concludes with Rex 6, an intricate, but lucidly woven fabric of complimentary phrases.

The live disc (XXX) picks up the threads from the previous day, but the uninterrupted performance gives the duo the opportunity to be more expansive: we hear ideas worked out, as in the studio, but also transitions between those ideas. Shipp’s playing is more rhapsodic, and again, there’s a mellowness to Parker’s tone. This is improvisation at the speed of thought, the duo passing and sharing tiny figures, rhythms and contours, each player matching the other in mood and dynamics: soft and playful, pounding and broody. After 25 minutes, both take solos, giving the other time to catch his breath, followed by a reflective passage with some beautifully weighted chords from Shipp. Eventually, the contemplative mood is broken as the pace picks up again, with florid lines wrapped round each other, until the performance comes to a quiet conclusion.

The audience response has been edited out (which is my preference) but I assume the duo received an enthusiastic applause rating.


You can  purchase it at instantjazz.com.