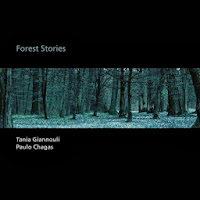 The label recommends to file this album under "new music", yet it's hard to pigeon-hole the overall sound.

The duo are pianist Tania Giannouli and wind instrumentalist Paulo Chagas, both classically trained. Some tracks have composed elements in them, whether melody, harmonic development or structure, other pieces are clearly improvised, and the genre is pretty eclectic overall, with aspects of ECM jazz, impressionism, new age and free improvisation.

But there is no reason to be scared: the duo keeps on the right side of good taste, with sounds that enter the ear quite easily - at least for lovers of free improv - but also with character and contemplative authenticity.

The eight pieces are extremely coherent and fit well together, full of careful and cautious sensitivity, measured pace, with a sense of wonder and surprise, yet all tracks are also different, not only because Chagas switches his instruments constantly -  oboe, wood flute, soprano sax, flute - but because of the changes in nature between the tracks, and because of the sudden shifts within some tracks, with the long "Spring's Chronic" being my favorite, a track which puts the listener often on the wrong foot, by doing the opposite of what is expected. Giannouli is a master of subtle touches, preferring to use less notes rather than more, just the right amount to set a scene, to create an atmosphere, to add tension and depth, sometimes alternated with a chord for emphasis and effect.

Yet the best thing on the album is the interaction between both artists, and the incredibly strong joint creation of an overall sound.

"In The Deepest Night" is the only track to be found on Youtube, and although it clearly demonstrates the mood of the album, its "new agey" sound is not typical for the rest of the music.

In any case, this is a beautiful album, to be played when in a more meditative mood, somewhere on a dark night during autumn.