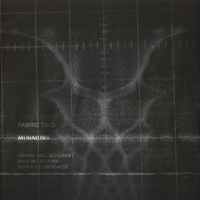 I guess we all know this. You buy a new record/CD and as soon as you are at home you put it on your stereo. You listen to it for the first time and you think: Okay, strong, a good album. Then you listen to it again and again and the more often you listen to it the better it gets. You discover hidden qualities, surprising and interesting details, you recognize what a treat it is. Fabric Trio’s “Murmurs” is exactly such an album.

The A-side of the record presents the Berlin-based band consisting of Frank Paul Schubert (alto and soprano saxophone), Mike Majkowski (bass) and Yorgos Dimitradis (drums) as an almost classical sax trio in the tradition of Ornette Coleman’s legendary “Golden Circle” band with David Izenzon and Charles Moffett because like them the trio acts almost independently without dissolving the group context. The music does not overwhelm the listener, it displays a natural, lyrical and elegant flow.

In “Jaw”, the first track, Schubert plays bright, guttural and coherent lines, exciting and full of contrasts, while bass and drums accompany him with unconventional, monotonous runs and bumpy beats. The band pushes this concept in “The Salt of Pleasure”, a track that reminds of the more introspective pieces of The Thing, while “Hook” and “Bristles” make you think of Coleman again. So far this would be a good album but there would be nothing special about it either. This radically changes on the flipside.
Hardly does the trio use conventional and classical structures of playing, alienation and the shaping of silence are the dominant stylistic devices. While Schubert plays melancholic blues lines in “Decomposer”, a track whose beginning is even right at the threshold of pain, bass and drums leave their supportive function and create a melodic, rhythmic and harmonic world of their own, which leads to a new form of communication compared to the first tracks. It seems as if the musicians were trying to discover the sounds of their instruments anew.

Especially “Acorn/Tongue”, the longest and most exciting composition of the album, tries to re-define sound.  The musicians play undefined overtones, Schubert’s sax sounds like a dying dragon, fatally wounded, exhaling steam from huge nostrils, weary, resigned, doomed. The drum beats come down on the creature like hailstones, and the bass accompanies this drama playing extremely high and low registers or it remains hammering percussive chords. The whole track can be considered as a suite of soundscapes, sound and silence are equal elements in the musical structure of the composition itself, with silence having become a medium to create structural tension and tonal concentration.

As I said in the beginning: “Murmurs” is an unusual, magnificent and captivating album, the deeper you listen to it, the more it grows.

“Murmurs” is limited to 300 copies only and you can buy it from the label nobusinessrecords.com where you can also listen to short snippets of “Jaw” and “Decomposer”.

You can find a copy at instantjazz.com.