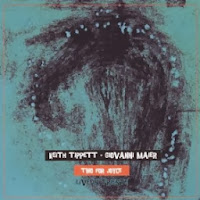 James Joyce (1882 – 1941) lived in Trieste for fifteen years from 1904, where he completed A Portrait of the Artist as a Young Man and wrote most of Ulysses. Two statues, various tours around the city, and annual conferences now celebrate this famous resident. In May 2012, Keith Tippet (piano) and Giovanni Maier (double bass) played at Teatro Miela as part of the city’s “Le Nuove Rotte del Jazz” (New Routes in Jazz) festival, in a performance they acknowledge was a homage to Joyce “who has been both an inspiration and a passion for us”.

The most obvious inspiration is Ulysses, and Joyce’s famous stream of consciousness technique, his literary allusions, and mimicking of different genres – such as romantic novelettes, newspaper headlines, and advertisements – rather than Finnegans Wake, a book no person I know has admitted to finishing. One can hear the parallels in Tippet’s eclectic mix of styles – jazz (traditional to free), classical and popular music – where apparently disparate ideas from high and low culture flow into each other through free associations. The continuous performance of some 50 minutes – spontaneous and virtuosic – allows the duo to explore these to their full affect.

They open with undulating waves on the piano over Maier’s propulsive bass, and a run of notes picked out in the piano’s upper registers, until eventually brought to an end by a Rachmaninoff-like cadence from Tippet. After a passage of arco bass accompanied by soft chords, Tippet plays a folk-like melody reminiscent of Janáček’s piano music, but it’s true identity only becomes clear in Maier’s subsequent solo – Charles Mingus’ Goodbye Pork Pie Hat. The theme is taken up by both and concludes as a lullaby.

After some bowed harmonics and plucked piano strings, Tippet introduces a new passage with a staccato motif that sounds like something from one of Bartok’s piano concertos, accompanied by Maier’s skittish bass. The music builds powerfully, with jazz inflections and accelerates into a haze of tremolandos, before the motif returns. This then morphs into a repeated rhythm in the left hand with irregular accents in the right: an allusion to the Augers of Spring section from Stravinsky’s The Rite of Spring.

Tippet’s use of the prepared piano is not the multitude of incongruous sounds pioneered by John Cage – with various objects set in the strings – but a more selective treatment, placed and removed at will, which allows him to play standard and prepared portions of the keyboard at the same time. This produces a counterpoint of normal piano timbre and exotic textures, with music to match.  After the last passage mentioned above, a gently rocking folk melody emerges, with the treated upper register resembling a cimbalon, and a delicate pizzicato on the bass which transforms the tune back into Mingus. Later, washes of sound at the piano’s lower end alternate with a gamelan-like theme in the buzzing upper octaves, until the cascades envelop everything and are joined by the sound of a harpsichord in perpetuum mobile. There are surprises and delights at every turn, and thoughts of Mingus don’t stop at quotation: Maier’s bass lines have that same solid, beefy quality.

In Ulysses there are tributes to maudlin popular songs, and at the same time a lampooning of the lyrics as overly sentimental. One doesn’t sense quite that edge here but as with Joyce, under the playfulness there’s a serious point being made. This performance is not a game of “Name the Composer” for music geeks (though I may have given that impression) but a genuinely inventive celebration of musical diversity which shows that the demarcation of genres is really not that rigid, and that the spaces between can prove just as interesting.