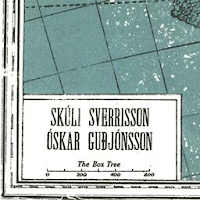 Desist is an album from 1999 featuring the Icelandic composer and bassist Skúli Sverrisson and the Australian clarinettist Anthony Burr, noticeably not playing their respective instrument here, being the work primarily constituted of dark electronic soundscapes. Certainly it’s not a milestone in the history of music but it marked a really important step forward - if you care about directions - for my understanding of composition and sound in general. At the time, in my early twenties, it showed me, after several years of punk formerly and post-rock just after, how I was going to mature my notion of freedom in music, a notion that can be easily summed up in “it doesn’t matter what instrument you play if you have some serious ideas to develop”. I should point out another work as important to me, which is the enormous 1-3 by Supersilent, released in the same year. I haven’t followed Sverrisson’s career that much after the quoted album, even if the same duo released another interesting cooperation in 2005 called A thousand incidents arise – in which the sounds of real physical instruments as we know them started to emerge. To be thorough he has had a really brilliant and notable career since then, an impressive discography and a really wide range of collaborations spanning many genres and involving names as Laurie Anderson, David Sylvian and Blonde Redhead.

By the way this story is basically the main reason why I decided to review this 2013 release where Sverrisson, here on classical guitar, teams up with a compatriot sax player by the very accented name of Óskar Guðjónsson. I’m sorry for the ones thinking that there could have been some more serious reasons behind my choices. Then I started listening to it and I realized that my choice was not so accidental (or if you feel mystic, that coincidence more likely doesn’t exists).

Beyond question this is a pleasurable album, quiet, traditional in the best possible meaning of this equivocal word, a work that shows us the musicians totally in command of their instruments. It is a relaxing album that you may want to listen after a hard day, just to regain a peaceful rhythm. There’s the evident purpose to leave the instruments and the tones fully unaltered, pure and totally acoustic, walking through widely known paths with no less intensity and feeling as if it would be the first time.

What grabs my attention here is the synchronic course that characterises my intersections with Sverrisson music. He has a strong classical education even if, when I first got to know him, I was still dealing with the belief that tangible wood or strings instruments as much as a polyphonic orchestration were not enough - and, I can admit, not enough “cool” - to give completeness to a musical creation (it was long time before the “modern classical” renaissance), and now that I don’t pay much attention anymore to the source and genesis of an act of sound, but rather just try to grasp just the idea that it conveys, Sverrisson is back in some way to the roots playing old fashioned tunes. So we met again.

Everything here reminds me just how much I’m fashionable and how fast the time goes by. But this is another story.