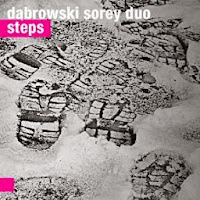 New York drummer Tyshawn Sorey is already a stylistic reference in modern drumming, with a discography of five albums, the latest one "Union" by Paradoxical Frog, with Kris Davis and Ingrid Laubrock, despite his young age, and we find him now in the company of Polish trumpeter Tomasz Dabrowki, known from Hunger Pangs with "Meet Meat" and from his own Tom Trio, both recently reviewed here, as talented and even younger than the drummer.

Both met a clinic that Sorey gave in Poland, and they decided to perform this fascinating duo performance, a format that is not only one of my favorites (see the "trumpet-drums" label in the right column), but also one that finds appeal among the young generation of Polish musicians (Artur Majewski and Kuba Suchar, Wojtek Jachna and Jacek Buhl, Kamil Szuszkiewicz & Hubert Zemler) amazingly enough, and of course also with the grandmasters of trumpet and drums improvisation: Bill Dixon and Tony Oxley, Don Cherry and Ed Blackwell, Wadada Leo Smith and Blackwell/DeJohnette/Sommers/Rudolph, Lester Bowie and Philip Wilson .

To the music now : both musicians treat their instruments in the traditional way : no electronics, no extended techniques, just plain playing, and which is good because both musicians are quite refined stylists, lovers of clear sounds which bounce and dance around each other. All tracks are called "Songs", which testifies of the compact lyricism of the compositions and the playing. A single idea, a tune, a mood, a rhythm to play with, to expand on, to interact on, and then on to the next tune. Simplicity and musical joy are at the core of this album. The moods can be solemn, playful or even jubilant, and the total is a coherent treat of raw sophistication, intimate and sensitive.

Highly recommended for fans of the format.

I often find extended techniques irritating and thankfully (as the review says) they do not feature on this stunning and incredibly melodic recording. I am a big fan of these minimalist settings and this is one of the best I've heard -- ever!

Really liked what I heard on the clip!