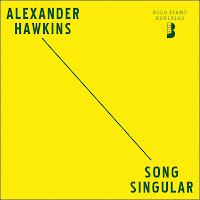 Piano solo albums are one of those mediums that reveal much about the composer, probably because there's really no place to hide! "Song Singular" is a new album out on the Babel label from the composer/pianist Alexander Hawkins made up of ten pieces. It shows off not only his very quirky, but catchy, compositions, but also what a top level pianist Hawkins is. Stylistically it's difficult to place him in any one camp but if you're familiar with the solo albums of pianists Randy Weston, Matthew Shipp, Misha Mengleberg, Craig Taborn or Myra Melford then you have an idea of the type of playing and musical direction the music takes. In particular, like Randy Weston, his use of a strong bass note rhythms, Hawkins manages to create complex melodies which even if abstract are also accesible.

There are ten titles on the record, one of them a re-worked version of "Take the A Train" (Billy Strayhorn). The music borders between a contemporary classical feel, not unlike Henri Dutilleux, and bright powerful Monk type spiky melodies built around intervalic leaps and a stumbling time feel. "Stillness from 37,000 ft" (tk4), has a bass line that sounds out of sync. With its melody gradually building up steam, the two lines,  like a conversation, vie for their own space. "Two Dormant, One Active" (tk5) starts with a curious line reminding me of of a standard. This is not surprising, a few tracks later at "Take the A Train" (tk7), you also have the same reaction of "I know this tune, but ...?" Another tune that does this is "Hope Step the Lava Flow" (tk6) which is the closest you get to a regular tune with an almost walking bass line. Maybe it's this which makes the music so interesting. Themes and ideas develop, giving you food for your ears you listen intently, following the maze of notes that unravel. "Early Then, M.A." (tk2) and "Dancing Between Points" (tk8) could be called ballads, playing with time or tempo, and could be called - could one say - rhapsodic. They both use the piano's  full range to create lush chord sounds and rippling arpeggios.

This album will be a delight to anyone who enjoys melodic (modern) music that has a direction. On this record you get to hear a pianist developing ideas with no holds barred, creating music and pushing boundaries at the same time.

A quick note: Alexander Hawkins (and his Ensemble) released this album in tandem with "Step Wide, Step Deep", also released on Babel this year. As yet I haven't had time to listen to the ensemble record, but I notice there are a couple of titles which pass between the two albums. We'll keep you posted here on the blog in the next weeks for an update - the album looks very promising!