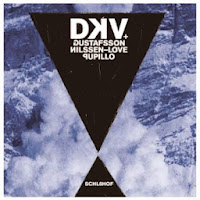 The last review in our week of new recording featuring Paal Nilssen-Love has him on only two of the three tracks. “Schl8hof” (a pun dealing with the German number 8 - Acht  – in Schlachthof, the German word for slaughterhouse) is actually a DKV album (Hamid Drake, Kent Kessler and Ken Vandermark) who were joined by Mats Gustafsson on tenor and baritone sax, Massimo Pupillo on electric bass and Nilssen-Love on drums at the 2011 Unlimited Festival in Wels, Austria (1). Quite apart from the fact that this is an interesting match in general, producing a splendid album, it’s particularly fascinating to listen to two of the best drummers of the free jazz scene playing together.

DKV was one of the most prolific and versatile trios between 1996 and 2002, when they took an album break. In 2012, they released their magnum opus: “Past Present” on Not Two. DKV is one of the tightest free-improvisation units you can imagine due to the use of written material on which they improvise extensively. It’s especially Hamid Drake’s rhythmic pulse – ranging from funky elegant grooves to free wildfire – that provides the fundamentals of this group.

It’s almost a shock when “This Building is on Fire”, the first track, abruptly ends and Gustafsson, Pupillo and Nilssen-Love step into the arena, as if they were burying DKV under their wall of noise. If you listen closely however, you realize that both trios complement each other excellently. Nilssen-Love shows his wild and expressive side but Drake is a much too experienced and great a drummer to drown in this torrent. He sticks to his style, and the result is a highly energetic combination that also grooves like hell.

Vandermark and Gustafsson are a similar combination. On the second track, “All In”, Gustafsson structures the piece delivering brutal chords – repetitive, off-the-wall, manic – a rhythmic texture which Vandermark uses this to soar like an eagle. They dance with each other, they take out speed (when they do this it is simply great), they wrestle with each other – as well as Pupillo and Kessler. One of the album’s magical moments is their bass duet on “All Out”.

The reviews on Paal Nilssen-Love’s albums with Lasse Marhaug were a lot about noise, particularly the beauty of it. This album comes very close to that. It’s available on vinyl and CD, but in this case I’d recommend the latter as you get the wonderful extra DKV track and can listen to the half hour “All Out” without having to turn the LP.


(1) As far as we know this combination played together on 6 November 2011 at the Unlimited Festival curated by Peter Brötzmann, and heard on one track on Long Story Short. Indeed, we wonder whether the recording date of 25 November 2011 for the current album is correct since the festival does not go on that long. So, it might be possible that the date given is wrong.

The album is available at instantjazz.com.

I love this album. One of my favs for the year.

A thrilling album, although monotonous. Gustafsson honks the same honk for 40 odd minutes.

Gustafsson honks the same honk for 20 odd years. Ditto for Brotzmann, only make it 40 odd.

Yes, there is (more than) a little truth in what you say anon.I have to agree unfortunately, not my favourite sax players.