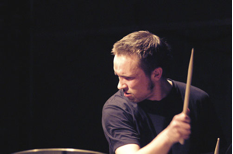 
Listening to the latest albums by this hugely productive drummer has been a great pleasure, all of them varied, tense, exciting – he’s one of the greatest free jazz drummers of the younger generation (along with Chris Corsano). If any of them tweak your interest, you won’t go far wrong.

Future projects include an album with Frode Gjerstad, the curation of the All Ears Festival in January (a splendid non-profit festival for improvised music in Oslo which has existed since 2002; check out this year’s program), a duo album with Arto Lindsay and a large ensemble project with Norwegian and Finnish musicians.

Thanks for all the PNL reviews and especially thanks to Paal for being such a great and challenging drummer.

Last year I had bought one of his duets with Lasse Marhaug and I'll confess I haven't given it a lot of play. These reviews have prompted me to give it another listen.