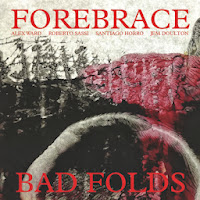 The dark rumble of bass and drums is suddenly pierced by a sharp melody from a clarinet, it appears suddenly like an X-Acto knife poking through dense fabric, slowly shredding the material and letting bits of light through. Then some fearsome guitar playing ratchets up the intensity ... it's Alex Ward's group Forebrace and their album Bad Folds.

Ward, the clarinetist and leader, has created a monster of a group that embraces hard hitting predecessors like Last Exit and the textures of early fusion in an avant-garde metal approach. When the more tender tones of the clarinet come to the fore, memories of the sonic brutality only a moment ago fade, but not for long. In addition to Ward, the group is Roberto Sassi on electric guitar, Santiago Horro on electric bass and Jem Doulton on drums.

From opening sounds of 'Presage' to the forlorn intro in the follow up 'Dolorimetry', folk like melodies get into brawling encounters with driving rock rhythms. The group works in contrasts between atmospheric whimsy and intense improvisatory rock.

Dense ensemble playing gives way to the dark funk passages of 'Outwall,' which to me channels Miles Davis' On the Corner. Sassi take the spotlight here with a riveting solo that is all electric shocks and shards of broken glass - the metallic edges complimenting the clarinet as the two delve deep into intertwining passages.

The outlier is 'Groundmass', where the group embraces a lighter approach, but it is in no way less intense. Horro and Doulton are felt here the most, with the electric bass throbbing and pulsating while the drums add some off-kilter motion.

The sheer audacity of the sound leaves a gorgeous auditory residue lingering long after listening. This is one to seek out.