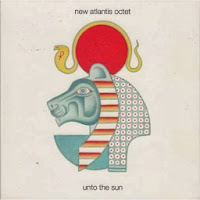 In the early seventies, jazz was propulsed into in a cultural trend of full exuberance and possibilities, in line with the technical and aural floodgates being opened in the second half of the sixties. New instruments and new technology were introduced, but also the communal concept of creating music on the spot, with whomever happened to be around, and it basically didn't matter whether your background was in rock or in funk or in jazz, the more influences, the better, as long as the music performed originated from a sense of musical community, of tribal belonging, of being member of the same spiritual or visionary family, which would break down the boundaries of convention, the limitations of bourgeois society, the phobia and pettiness of middle-class America, breaking into new realms of love and spiritual unity, unleashing powers and sounds unheard of before, and some of them went even beyond the confines of our mother earth, deep into the universe, and even to Saturn.

One man even claimed he was from Saturn, a musician called Sun Ra, who already by the late fifties had paved the way, and even if people thought him excentric and bizarre, his performances and outfits and music gradually got acceptance and even traction with an enthusiastic incrowd of fans, with musical sentiments that gradually also shifted from a boppish base to the more maddening sounds of free jazz, but not with the smaller quartets or quintets as expected, but with large bands, introducing a cocktail of instruments, resulting in the cosmic chaos that became his trademark.

Other bands followed suit, with the Human Arts Ensemble a highly recommended reference for the ones interested, with musicians such as Luther Thomas, James Marshall, Charles "Bobo" Shaw, Oliver Lake and Lester Bowie. The music had to be raw, brutal, chaotic, unrefined, almost by definition, as long as it was expansive and lengthy and hypnotic and exuberant, a powerhouse of sound created by a whole group of musicians who felt comfortable moving in and out of the huge wall of sound of cacophonic voices and maddening percussive power.

And the music goes back to this early seventies mayhem, with two long tracks, fully improvised, and the sound is rambunctious, loud, dense and raucous, and even if the listener is overwhelmed at first, the playing is so good, and the musicians sufficiently sophisticated and unselfish to give priority to the overall sound, taking a step back once in a while to give their bandmates some space, that the overall piece is highly enjoyable.

You know of course that what you're hearing is not really evolving, that there is no point to which they are working, it's all in the "now", full of energy and group dynamics, and even if their final destination clearly is to reach the sun (who would doubt the truthfulness of the title?), this is all about the journey itself.

In Sun Ra's cosmic philosophy, outer space and ancient cultures have obvious connections, and hence the titles here, "Sekhmet" for the first thirty-five minutes refers to ancien Egypt and "Amaterasu" for the next thirty-seven refers to Japan's shinto religion, each time invoking the goddesses of the sun, the former the daughter of no less than Ra himself, the second being the goddess of the sun herself.

Both tracks give you more than one hour of absolute cosmic chaos. It is fun, it is exhausting, it is endless, it is a listening experience that once the last notes are played after seventy-three minutes of uninterupted listening at full volume, and the silence of your surroundings is heard again, perplexingly, your brain has been programmed in such a way, that you have no other thought in your head than that you've actually reached the sun.

Simply to say is a great pleasure to read and enjoy this blog. Cheers !!!