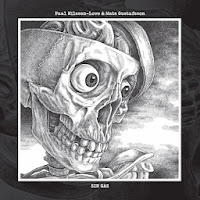 Earlier this year, Paal Nilssen-Love and Mats Gustafsson released "Con-gas", a rare breed of a double 7" vinyl album, with the title referring the congas, the percussion instrument, which on their second release in the series "Sin Gas", gets a Spanish pun as meaning "without bubbles", and as you can expect, the congas are gone, and the drum kit is back.

The long first track is the duo at its best, with Gustafsson howling his signature screams, full of endless lament and agony, against a highly kinetic all-over-the place-drumming by Nilssen-Love, the kind of energy romp that you can expect from the duo. Gustafsson switches instruments, tenor to bari to bass saxophone, making the depth of his howling even more impressive, developing the improvisation into a kind of headbanger slow rhythmic repetitive phrases beyond halfway - Gustafsson fans will recognise this instantly, reducing the speed, with Nilssen-Love leaving the space for the deep moaning of the bass saxophone, eventually turning into soft and weird whimpering, supported by little percussive effects, with the bass drum taking over the basic rhythm, quietly ... until all sounds die down.

"Slat Map" - a contraction of the musicians' first names I guess - is the shorter second track and it starts with a Gustafsson primal scream, interspersed with real shouts, over a high energy, unrelenting percussive rage produced by Nilssen-Love. It is a physical thing, and you can virtually see the Swede contorting his body to wrestle these manic sounds out of instrument, equally relentless. Things slow down a little in the middle part, pick up again in full force and then the finale is quiet and subdued.

It is a short EP, but the quality of the playing, and the interaction between both musicians is among the best you can find - powerful and deeply emotional at the same time. Great stuff.