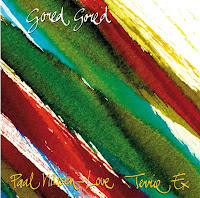 Fourty-two minutes of unadultered sonic violence and energy. Rock? Jazz? Noise? Punk? Paal Nilssen-Love beats the bejeezus out of his trap kit and Terrie Ex throws harsh antagonistic feedback attacks into the process, which have no direction at all, played with the enthusiasm and energy of a garage band of 16-year olds, exploring what they can produce together, equally being surprised at things that work and that don't work, with an audience that shouts and applauds when the volume decreases, thinking the lengthy improvisation is over, but actually it isn't, because neither Paal nor Terrie want to let go, diving back in, sometimes hesitantly, sometimes with renewed power, new attacks, some novel ideas - and it must be said, not all of them are violent - to be further explored, developed or altogether massacred with an attitude of self-destruction, with a loathing of feelings like empathy or sympathy or even apathy, expressing feelings of anger and disgust, as it should be in a punk band.