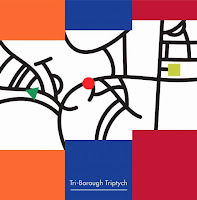 Tri-Borough Triptych could almost be considered a sequel to last year’s hard-to-place Impossibility in Its Purest Form—or, at the very least, an extension of the ideas it engaged. The albums both share a similar line-up and organizational structure: Lexer’s piano+ and Prévost’s percussion matched with an idiosyncratic saxophonist, then presented as a series of duos. But where Impossibility sported three shorter duos that culminated in a long trio performance, Tri-Borough Triptych forgoes the trio in favor of devoting more time to the stunning duets.

The first, “Camden,” is the familiar pairing of Parker and Prévost. About four minutes in, Parker touches on an almost Middle Eastern mode, accented by rich, methodical bows on the cymbals, which lend to the Eastern feel. Prévost’s palette seems expanded here; he coaxes a much richer range of sonorities from his cymbals, occasionally shadowing Parker’s tenor with impressive precision, and adds sporadic exclamation marks of toms and rubbed drumheads. The performance reprises the ritualistic air of their meetings on Most Materials: here, we encounter the secret rites of the Masters.

Equally exciting are the performances with Lexer. Every new album is an opportunity to see the development of his expertise with his piano+ system. Last year, I described his cyborg instrument as “neither piano nor electronics,” but “a very mysterious, organic soundworld that’s intimately tied to the physical act of playing piano, even though the source material is often hopelessly obscured.” On “Deptford” he becomes so subtly enmeshed with Prévost’s wash of sound that he’s difficult to pick out; his contributions connect in some subconscious place, like the omnipresent, deeply-felt hum of a giant transformer. At eight minutes, some delicate chords are sounded. They are fleeting, and the electronics sustain their ringing harmonics indefinitely, where they are soon subsumed into Prévost’s clatter, which sounds both immediate and distant, like a dark storm on the horizon whose first raindrops are already beginning to splash down. The music is abstract, but it’s difficult to listen without grasping for associations: later, the crackling of a fire, echoing in the heart of a cast iron stove.

But in the end, the first two-thirds of the album could be viewed as a set-up for the showdown between Lexer and Parker, their first meeting. Parker and Prévost have a storied history, and we’re now familiar with Lexer and Prévost, as well. We’re left anticipating the ways Lexer’s incredible piano+ system will interact with Parker’s singular approach, one that’s no stranger to dramatic electro-acoustic environments. Lexer is in a remarkable position to match a normally fixed-pitch instrument against the microtonal bath of Parker’s technique. As “Dalston” gets under way, Parker’s approach keeps close to his solo outings, with incredible runs on soprano that Lexer often engages indirectly, creating his own complex patterns of harmonics that crash into Parker’s. But there are also piano and sax-transcending drones, a product of Parker’s pulmonary might and Lexer’s technology. After 20 minutes, these give way to beautiful, chiming tones, a duet of church bells and birdsong.

What’s remarkable about Tri-Borough Triptych is how close these three very different instruments can be pulled together. These duos display of a new era of virtuosity, in which the musicians have moved beyond mere “chops” to a level where their chosen instrument can be melted down and re-forged to fit nearly any working context. But for anyone already familiar with these three, that’s hardly news.