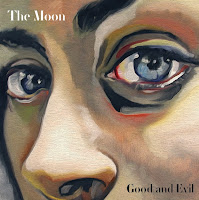 We praised the Adam Caine trio some years ago for their "Thousandfold" album on the No Business label, and now the New York guitarist is back with a duo recording together with Federico Ughi on drums.

Like on the trio album, the fully improvised music is as direct as can be, with rock-influenced playing, but jazz in nature. On the opening track the guitar is raw, with feedback piercing through, and the drums are energetic and powerful, violent even, as on tracks like "Primal Scene/Sister Fight" for instance.

The duo also has another side, closer to free improv, with in-the-moment sounds bouncing of strings and skins - as on "Cardboard" - or more elaborated soundscapes as in "Floyd", or more exploratory of new melodic sounds in "Dawn At The Edge Of The Universe".

Despite the limited line-up, the approach is quite varied, with interesting new ideas, but that's possibly also its weakness, because the less violent pieces somehow hesitate and linger too much to my taste.

Fans of modern guitar improvisation will love it ....