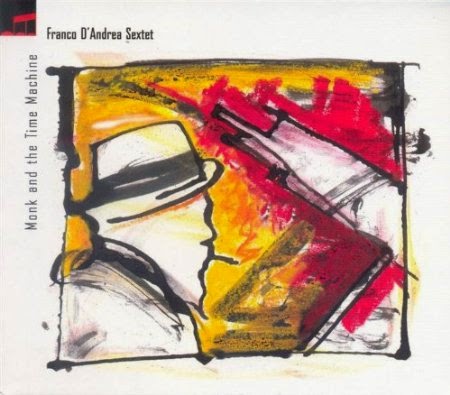 Now I am very fond of my Monk themes and I call’m my themes because I’ve been working with them for years now, squeezing them out of my clarinet and seeing where they lead me (no audience allowed). I see them as small extraction tools, they serve as a nice lithmus test for the extent of your musicianship. And then their titles: Ask Me Later, Humph, Ugly Beauty. D’Andrea says in his liner notes: “ I take Monk as a pretext, a starting point to go and visit all the places of my way to see the music.” Many did exactly that before him, and they have given me several highlights in my life. Take Von Schlippenbach’s extremely quirky Monk’s Casino, take Eugene Chadbourne’s fight to walk the narrow line where ugliness meets beauty and take of course any rendition of any Monk theme by the inimitable and era-defining ICP Orchestra.

It is no coincidence, to my ears, that D’Andrea quotes a Misha Mengelberg theme to set of his Monk and the Time Machine. I’m so sold. 'Into the Mystery – Deep Riff' the first piece is called and it does exactly that.  It pulls you in, pushes you away, teases you into this beautiful interplay where everybody’s tongue is firm in cheek, everybody’s abilities honed to impeccable freedom. When you listen, when you listen and you dig it,  can you dig it.  We have Franco D’Andrea picking out the keys with care and abandon, waiting for the empty space to appear to punch in the note it requires, enticing Daniele D’Agaro to take it away as a puppy takes away a towel too big for him, Mauro Ottolini underscoring, Andrea Ayassot exploring every alto between New Orleans and the Knitting Factory, living or dead, and Aldo Mella on bass and Zeno De Rossi on battery, the beating heart throughout this entire record.  When you have ever witnessed the murmurations of a flock of starlings you know exactly what I’m talking about.  “It is a curious thing, Harry, but perhaps those who are best suited to power are those who have never sought it. Those who, like you, have leadership thrust upon them, and take up the mantle because they must, and find to their own surprise that they wear it well.”  They wear it extremely well these Italians, remember their names if you don’t carry them in your heart yet.  Oh the gentle way with which they pry open the gates of 'Light Blue', circumscribing, waiting for the notes to land but not forgetting to revel in them while they fall and emerging with a twisted lounge take, and this is only track 2 .

You might have surmised by know that I have grown quite fond of this record. I carried it in my ears (Classic Ipod) for days now, I’ve walked through Vienna, through woods, through my everyday hometown and they form the perfect companion to anything really and to nothing in particular.  Then suddenly being entered midship by the erupting angularity of 'Epistrophy', taking it quickly and surely to its extremes, leaping over the boundaries and shaping it into a joyous anthem.  Ending it in the so effective ICP way: tam te dem tam. Schluss.  D’Andrea born 1941, Zeno de Rossi was born in Verona, Italy in the year of the dog on Elul 9, 5730 under the sign of virgo. It was a Thursday.  Track 3 is 'Misterioso', need I say more, and is given the full treatment by the trombone, tailgating its way through the parade, leaping into those treacherous sevenths with trepidation but without fear, creating a wake for the others who get unmoored in, and merging into the oh so skewed swing you get when you break it up and reassemble it without glossing over the seams.  Monk would have donned his fez and started skipping around the piano.  Ottolini born in 1972, D’Agaro born in 1958 and of course of long standing in Centazzo’s Mitteleuropa Orchestra.  He played in a trio with Tobias Delius and Sean Bergin for god’s sake.

A rare curiosity unsatisfied throughout the years permeates this music.  Take 'Bright Mississippi' which is next and unleashes the full power of this band, bringing it right back to Dixie, to JASS, to a toewaggin and fingerlicking romp.

Then comes 'Monk’s Mood', conjured up from the deepest bass on the piano ( bass sustained by De Rossi and Mella throughout), delicately picked out of the strings and taken over and augmented by the clarinet, and once again listening trance is locked on , this thing can on eternal repeat ( hooded trombone always does it to me). And then they take you by the hand again and lead you around the bend, whispering all the time: wait there’s more, there’s 'Abstraction'.  Cleansing off the ears while being kept on your toes.  Then picking us up for one more track.  Bass solo. Slowly and patiently weaving a pattern out of preexisting threads, some cymbal waving in the background, bass not taking that and speeding things up, triplets, quintuplets, squeezing the strings and handing over to the piano again, Monk’s splayed fingers, no D’Andrea and wait there’s another theme to take apart, 'Well You Needn’t'. You're talkin' so sweet well you needn't, you say you won't cheat well you needn't, you're tappin' your feet well you needn't, it's over now, it's over now.

Monk often ended his performances with this.  They do too.  Meandering out never touching examining every involute never even fullout playing it, but as every mathematician knows, from the involute you can easily reconstruct the original curve. They leave me rapt (well you needn’t).
And that’s only one disc.  They still have 'Brake’s Sake', 'Locomotive', 'Coming on the Hudson', 'Blue Monk',  'I Mean You'. Don’t get me started.

In these ears it has already become a timeless masterpiece.  Monk reversed, tried out, worked through, enlarged, taken to new turns, between past and future the ongoing game. Up there with the above mentioned. Up there with the Melodious Thunk himself: don’t play everything (or every time); let some things go by, some music just imagined. What you don’t play can be more important that what you do. Always leave them wanting more.

Nice review Hugo, gonna check that record out. See you saturday in Rijkevorsel!

D'Andrea is a big time favorite and I hadn't heard about this one. Thank you very much. Hopefully I can find it.

Any suggestions on where to buy this? Thanks.

I've seen it on iTunes in the US store, as well as Amazon.