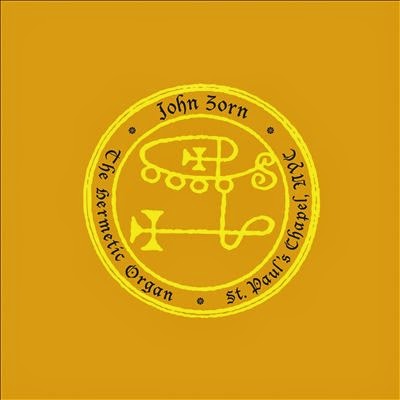 It is an exquisite experience to hear John Zorn play solo, on any instrument. In The Hermetic Organ, Vol. 2, the command he has over his own improvisations is remarkable. His instincts lead him to a sensitive balance of colors and expressions. There are no awkward transitions, no embarrassing turns of phrase, nothing to suggest that, for Zorn, the risks inherent in free improvisation produce anything other than quality music. Here we have an array of Zorn's diverse toolbox: from torrential intervals raining down the pipes, to the ecclesiastical moments of modal prayer, to the restraint of a Webern-like simplicity. Zorn's performance is versatile, but unlike you might suspect of Zornian eclecticism, it is neither disjunctive, nor erratic; each piece is a concise poem, presenting a singular idea, reflecting in its own light unto a logical conclusion.

Zorn does not have full technical command of the organ. This is evident by the fact that he never employs more than two contrapuntal voices at a time. At most, one is repetitive, or static, while the other extemporizes. He keeps his ideas simple, possibly intentionally, and the variations on his motives do not have the virtuosity that organ improvisation is accustomed to. We read in the accompanying notes, “Performed at St. Paul’s Chapel at a time when the organ was undergoing extensive reconstruction, the limited number of stops available to him focused his imagination to new heights…” This added limitation promotes the subliminal message of the project: Zorn can make music on any instrument, with any tools.

The downtown maverick takes to the instrument most ossified in the classical cannon. The project is neoclassical, not only for its very existence as “composer-gives-organ recital,” but also for titles such as “Crucifixion” and “Communion,” and for its wealth of tonal themes. It serves as an intimate listen into how Zorn processes compositional ideas, like a Persian miniature of his compositional oeuvre. I can say with certainty it is must-have for anyone with a serious interest in his life and work. The fact that Zorn has released two volumes, years apart, tells me that this is an important project for him. Can we expect a third?