Here is one that we really wanted to share... we hadn't realized that it came out in 2011, how time flies! 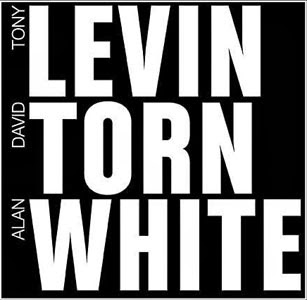 I would consider a life of crime to get this music on vinyl, my favorite format.  It’s that brilliant and thrilling.

Rarely, if ever, will you see me give a record 5 stars because I’m a picky, finicky, cranky old bastard (hell, I would only give “Kind of Blue” 4 ½) but this is the first in a very long time that I will without hesitation.  I’ve been a fan of all three of these musicians for as long as I can remember but getting them together, though the grouping may seem a bit odd to some people, is inspired.  How often can you say a record truly left you breathless and genuinely excited while you were listening?  This is that kind of record.  Every note stings your soul, hits your heart and forces you to listen.

Some folks will label this record “progressive fusion” or “prog rock/jazz” and you could understand that point of view from the first two tracks, “No Warning Lights” and “Ultra Mullet” but that would be shorting its scope and breadth.  It’s funky, jazzy, passionate, it rocks and most importantly it’s an inspiring collection.  How the third, and maybe my favorite track, “White Noise” could be improvised with its start/stops and superb interplay is beyond me but who cares.  It’s utterly moving.

Certainly each player’s pedigree is on offer here: Tony Levin with King Crimson and Peter Gabriel, Torn with David Bowie, Tori Amos, numerous solo projects and soundtracks and of course the estimable Alan White with prog rock supergroup Yes among others however there are only echoes of the past and the music they’ve made here is fresh, wholly original and stands on its own.

Torn’s solo’s on “The Hood Fell” and “Brain Tattoo” are jaw dropping and easily identifiable.  You will not mistake Mr. Torn for any other guitarist making music today.  His sound, tone, feel, ideas and originality are special and unique and are fully forward on this album.  As a soloist/improviser her has no peer and who knew Mr. White was so funky? (We all know how funky Mr. Levin is and truly he is the rock of this record-also  its co-producer- holding it down, centering it and propelling it forward relentlessly on every song.  “Prom Night of the Centipedes”?  Bravo!).  Special mention should be made of Scott Schorr the other credited producer on this collection who somehow was able to cull these performances from various dates and studios and make it feel cohesive while adding some tasty keyboard work of his own.

My other favorites on this album besides the aforementioned songs are the atmospheric and futuristic “Sleeping Horse” and the last track “Lights Out”.

According to White, the band did some sessions together but also recorded most of the project virtually from various locations which may be why David Torn remarked to me “It was kind of a weird record to make”.  In a brief back and forth David Torn told me all but one song was composed beforehand (he was asked to “make one up on the spot”) but all the soloing was entirely improvised (According to David Torn all of his work was completely improvised and Tony Levin and Mr. Schorr were present during all of his work).  This makes sense since the most compelling moments on this record are the solo sections but the compositions as a whole stand on their own.  The mere fact that this album could be recorded remotely in a few different locations over a period of time and still be as strong as it sounds is quite an achievement but in no way subtracts from the power of the music they’ve created.  But don’t think it’s all sturm and drang.  There’s a lot of subtlety at play here.  After all, these gents are utter professionals and not interested in showing off.  They know there needs to be an ebb and flow and my guess is they weren’t even thinking about that.  It probably just happened which is what true artists at the top of their game do.  What do our British friends say?  Gobsmacked?  Consider me smacked (by gobs and gobs and…).  Get this album.