For the second installment of guitar week, I am excited to be sharing some thoughts on recent releases from two great guitarists (oh hell, they're all great). From these two artists, the blog has most recently reviewed Raoul Bjorkenheim's Scorch Trio and Mary Halvorson's Ghost Loops... 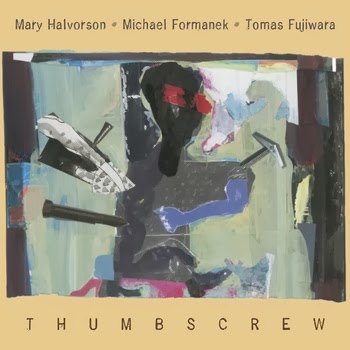 This trio, comprised of guitarist Mary Halvorson, bassist Michael Formanek, and drummer Tomas Fujiwara is real treat. Like on Halvorson's recent Ghost Loops, the trio format gives the guitarist's unusual chord voicing and intervallic leaps a big space to fill up. The group is tight, and as far out as they may go, they lock together tightly and deliver some exceptional music.

The opener "Cheap Knock Off" sets the stage with a lyrical opening passage and within five minutes, builds to a full throated roar. Fujiwara and Formanek create a strong foundation upon which the Halvorson builds a structure, and then proceeds to burn it down. The smarmily named "iThumbscrew" begins as a rhythmic exercise, the guitar connecting with drum's deep pockets with an arpeggiated melody. Fujiwara's drums playfully responds to Halvorson's more squirrely musical moments and deftly supporting the more muscular ones. "Fluid Hills in Pink" shows Halvorson's more subdued side, and places Fujiwara and Formanek in the spotlight for an extended and slightly mysterious sounding duet. Skipping ahead, the track "Still … Doesn't Swing" actually seems to swing as much as the other tracks. Generally, the tracks seem to be built off of composed frameworks with plenty of room for making it up as they go along, however, this one in particular, breaks down into down into some incredibly heated improvisation, with Halvorson pulling out all sorts of effects while the rhythm section digging into some deep syncopations.

Thumbscrew is a great trio, highly listenable and lyrical, but does not shy away from the tough stuff. 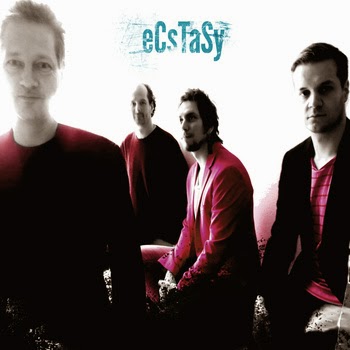 The eCsTaSy trio is a new all Finnish group from guitarist Raoul Bjorkenheim. This new group encompasses the fire of the Scorch Trio and improvisational power of the Kalabalik Trio with some of the orchestral vision of the UMO Orchestra's Primal Mind. Comprised of saxophonist Pauli Lyytinen, bassist Jori Huhtala and drummer Markku Ounaskari, it's not quite the size of an orchestra but the guitarist's compositions and arrangements think expansively.

First track, "El Pueblo Unido" kicks things off in a soaring fashion. The guitarists biting tone is big and rises above the rhythm section in a tradition that I would liken to Terje Rypdal's more rock oriented output. The arrangement makes the quartet sound quite full. The next track "SOS" is festooned with groove - the soprano sax juxtaposed with Bjorkenheim's low end riffs and rapid fire unison lines beautifully frame the fiery solos - especially from upright bassist Huhtala. "As Luck Would Have It" eventually turns into another barnburner, with Huhtala taking an extended solo and Bjorkenheim and Lyyntinen delivering complex intertwining melodies. Other textures and free-playing take over in "Threshold", which reminds me of the atmospheric fusion of early Weather Report.

It's great to hear Bjorkenheim, who has been delivering some excellent power trio based recordings, add some additional sonic elements. Each piece seems carefully composed to get the most out the instruments, but leaves plenty of room for the musicians to stretch out.


I'm surprised there's no reference to Krakatau in the Bjorkenheim review. A band of his that is proabably closest to this new one

Thanks for your comment - I'll need to get better acquainted with Krakatau.


Mark said...
you'll not be disappointed, I'm sure. the two albums on ECM are probably the easisest to find. Both are very good