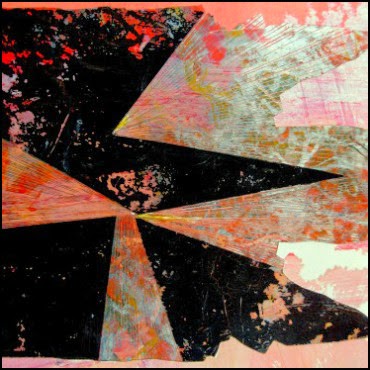 The duo of Rob Mazurek on cornet and Chad Taylor on percussion becomes a real orchestra, by adding layers and layers of sound, performed on their instruments, or ambient or electronically altered. Mazurek at times sounds like a full horn section in a big band, joyfully soloing on top of it, with Taylor's beats repeated and edited for maximum effect.

Like on previous albums, the overall sound alternates dark passages with celebratory and upbeat injections, as a collage of sonic colours, danceable even, as a great mix of sounds from across the globe, but preferably its most tropical parts, its most tropical parties, in a dense atmosphere of warm fun with subterranean gloom and high energy madness, built around a rhythmic backbone supporting a great "moqueca" of musical influences and genres, of jazz, of techno, of electronics, of film music, of street music, without limit and restriction, welcoming everything in the same stew, as long as it's tasteful, compelling, dramatic or fun, including "a Ghanian folk tune and Ennio Morricone played on cornet, drums, mbira, ballophone, bamboo flute and Game Boy". Nineteen years after its inception, the latest incarnation of the Chicago Underground Collective is still alive and kicking!

Hi Craig,
It says what I meant, but apparently in English the word "frivolous" has more negative connotations than in some other languages. I meant upbeat, lighthearted, fun. I'll rectify to avoid confusion.
Thanks
stef

Sometimes reminds me of the fantastic Ostracon's "Unauthorized Modifications".

I'm liking the sound bytes I've heard from this CU work so far and I can only hope that they've left behind a good portion of the dense, thickety, oppressive electronica of 'Age of Energy' which I personally found the most unpleasant and un-musical of their entire discography. I may be alone in this sentiment ?