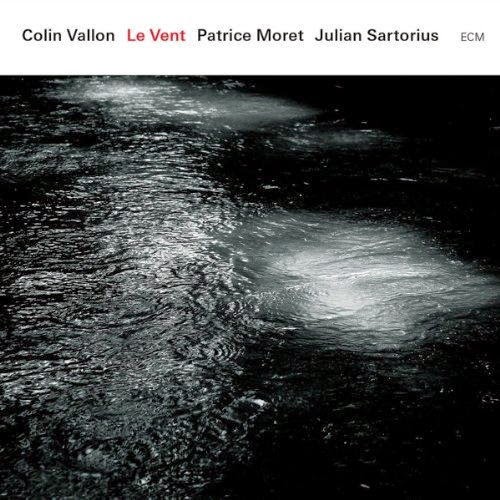 Single notes like heavy drops of port wine on the tongue. A house at a Swiss lake, a porch on a warm summer’s night, it is 4 a.m. A soft breeze is coming from the water. The music on the stereo comes down on you like an Erik Satie melody with a huge wind chime in the background. However, there is an austere solemnity to the notes, an enormous sadness combined with the utmost beauty. This is “Le Vent”, the title track of the new album of the Colin Vallon Trio.

After their ECM debut album “Rruga” drummer Samuel Rohrer has left the trio and was replaced by Julian Sartorius which means that pianist Colin Vallon has had to take over more compositional responsibility. The result is that the compositions are even more fragmented, reduced and minimalist than the ones on their two previous albums (their first album was “Ailleurs” on HatHut). On the other hand the trio sounds more like a unit, a real collective stripped bare of unnecessary solo excursions. The compositions unfold slowly, yet consequently, Vallon’s subtlety is more in the focus than before, which puts more emphasis on the composition itself.

Tracks like “Le Quai” and “Cendre” are airy, easily accessible, light-headed examples of the new dimension Vallon and his collaborators have reached – and Manfred Eicher’s typical ECM sound is just perfect for this music. However, it is not always just pure atmosphere, the band can also add slow grooves to the songs, like in “Immobile” or “Pixels”, especially the last one being a melody which is brushed against the grain of the pulse of the track.

Yet, not everything is subjected to the new sound. The album is bookended by "Juuichi", a composition by bassist Patrice Moret, which reminds of the repetitive and slowly shifting and even driving motifs from “Rruga”, and the collective composition “Coriolis”, in which Vallon's prepared piano snippets entwine with Julian Sartorius' bells to create, over a simply bowed bass line, the feeling of a falling icy rain during the return of livestock from Swiss high alpine summer pastures - a track with almost Wagnerian qualities (listen to the mock alphorn in the background).

“Le vent” is an album for fans of classic piano trios, for listeners who like Bill Evans and Keith Jarrett. It is not as adventurous as RED Trio for example, but the compositional standard is absolutely high and the musicianship is great as well. Absolutely worth a try.

Their first album was "Les Ombres" on Unit Records (2004). The one on HatHut is their second.