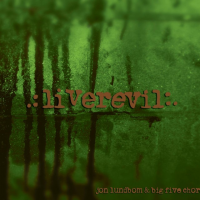 This live double album not only shares a similar title to the famous live Miles Davis album, by all but one character, but also has that sort of exploratory fusion vibe to it at times. As the title suggests it certainly whips-up a potent brew that goes down well.  However, there’s no copying going on here and Lundbom’s clear musical vision continues to make him the original artist that he is.

The sound of the band is top notch and the tunes are played well throughout. The pieces are allowed to breathe in the live environment and the creative musicianship from all the band members gives the well-known tunes a new lease of life.  Lundbom’s playing is excellent and his smooth legato work nestles alongside more angular passages and mazey runs where free playing and more traditional jazz forms meet.  On occasion the music feels barely contained by the structures and the playing threatens to burst the forms wide open.

Great moments and interesting sounds keep appearing throughout the album such as the mash-up between electric piano and drums, multiphonic punctuations and nasal tones from the saxophones, ‘On Jacation’ sports its John Scofield-like guitar sound, which Lundbom wields extremely comfortably, and ‘Bring Forth The Battalions’ with it’s dirge-like feel, which Lundbom excels on.

There’s a buzz about this album and the excitement in the atmosphere comes across in the recording, and not just from the whoops and calls from the audience, but tangibly, so that it’s very presence can be felt within the music itself.

This is a great album and although some live albums can be for completists or die-hard fans this is not one of them.  This double-album contains a couple of great tunes from his studio albums, several new tunes and a suite of Wiccan prayer songs previously unrecorded.  This album could also serve as a good place to start for those wanting an introduction to his music, in fact, this is highly recommended for anyone wanting to hear great music!

Nice, yet the amazing thing is that nowhere on his website, Lundbom mentions the members of his band, or at least it's well hidden. Strange.