The only way to explain that brilliance is to go along with a few tracks, no matter the fact that I despise the “track by track” reviews. Take for instance the first track “A Companion Piece”. It starts slowly, with swelling guitar textures, a calm but somewhat mysterious Bill Frisell-ish atmosphere. You gladly kick into the mellow groove, it’s all around you. And then, just when you’ve realized that you could do this all day, the Singers go behind your back and turn the tune into a massive blow-out, with Nels Cline riding a huge solo as only he knows how to, rolling the song downhill with no breaks. A pure adrenaline rush, and the surprise element is unparalleled.

Then we have “The Wedding Band”. It starts with some joyous percussion, which initiates different textures to gradually form a very ecstatic festive atmosphere. The trio then concludes that momentum in rich style, you get something like a chorus, with grand harmony and a beautiful slide-ish guitar sound, and just when you start to think this song will finish like an Oscar winning motion picture – the Singers launch the song into deep space. I mean literally, that’s the only way to explain that part – the sound of a spaceship launching into the unknown.

Another notable surprise at the end of the album is the song “Hairy Mother”. At the beginning they come at you with some proto-punk / industrial “huge drums pounding”, just to suddenly change the context as the guitar enters, which eventually will turn the song into fuzzy garage riff-fest. Definitely the most “rocking” number in the Singers’ catalogue.

That surprise pattern is presented on every track on Macroscope. The Singers mastered the play with context almost to perfection, although there was a last minute change in the trio’s line-up  (Trevor Dunn on bass instead of Devin Hoff) they have never sounded so natural and at ease. They had some forced elements at the previous albums but all that impurities are gone now. Even the track “Red Before Orange” which is essentially a youtube jazz guitar backing track with Nels Cline soloing over, in the context of the album, reaches out with something to say. As all the Singers albums there is a big palette of guests on every track, who augment the background with all the different textures, making this the most complete album in the Singers discography.

From all the guitarists in the world Nels Cline deserved bigger recognition the most. I’m glad that Wilco enabled him that. He’s a really unique voice on the guitar, and with his unusual guitar upbringing - at all time he offers the listener a different perspective to the way guitar should played. Macroscope will please his old and new listeners. 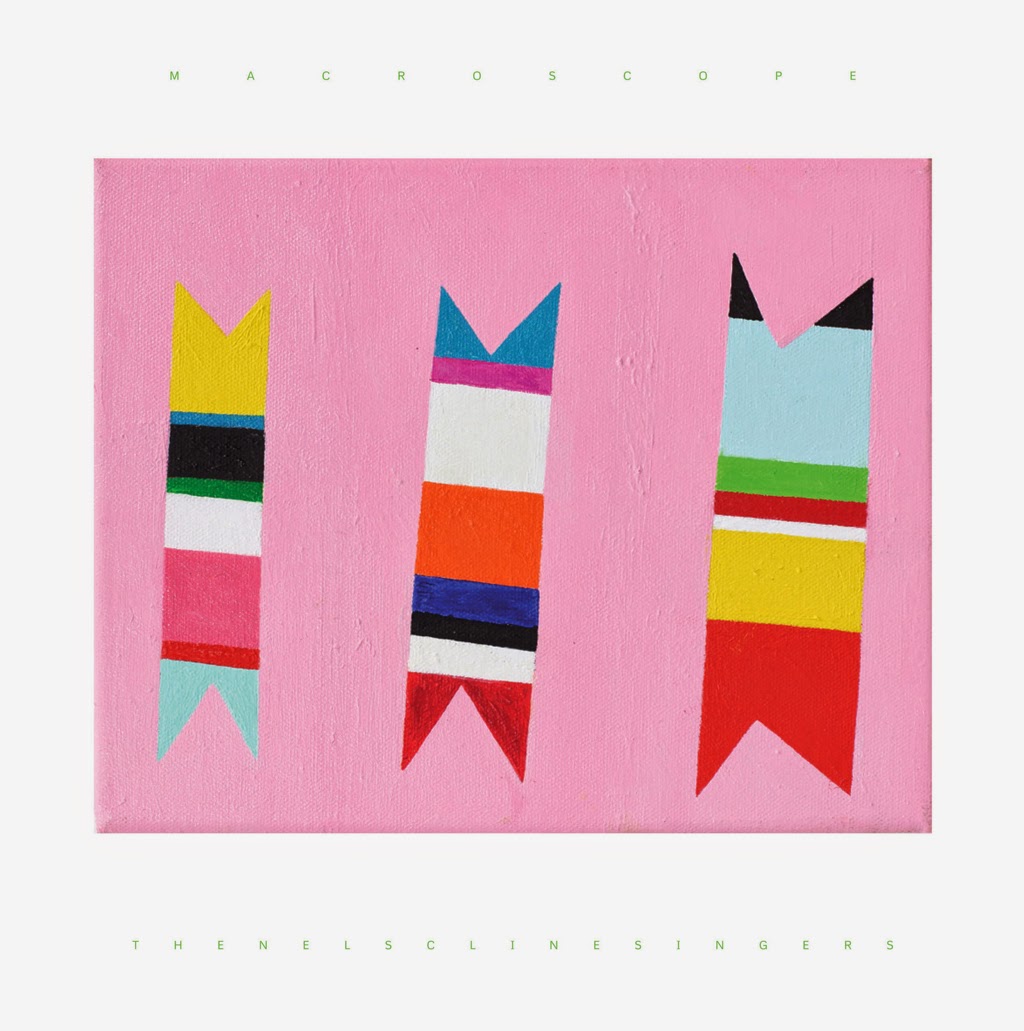 My pal Peter is a free jazz fan, a real aficionado, he can never get enough of this music, and he also admires Frank Zappa. So I thought the new Nels Cline Singers album might be interesting for him. When we met lately he said that he almost always likes my recommendations but that he can’t do anything with this album, that it was neither fish nor flesh, it was too inconsistent for him.

Interestingly enough this is just what I like about Nels Cline, and as Booka already said you can’t pin him down to a certain style, actually he feels at home in almost every genre. He is the one who makes Wilco so exceptional (which other rock band affords a free jazz guitarist?), he plays duos with Thurston Moore, Elliott Sharp or Vinny Golia, with Carla Bozulich he recorded a remake of Willie Nelson’s classic Red Headed Stranger, he plays in several larger formations, he has his trio and he is the head of The Nels Cline Singers (who ironically hardly sing).

In an interview Cline said that he “was a rock and roll kid, but after hearing Coltrane and Miles and Weather Report, then Indian music and Nigerian pop (…) purism just was not possible.”

Macroscope is Cline’s musical world in a nutshell, in which he displays his mastership in creating sound and genre bastards, it’s a buffet of delicious dishes and you are free to pick your favorite stuff. You can choose between “Red Before Orange”, a super-laid-back George Benson number that changes to mean Larry Coryell sounds – and back. Or “The Wedding Band”, which is based on Indian raga percussions combined with a thin guitar sound which is alienated through different effects and loops, a track moving to and fro without a concrete center, like an echo in the jungle – and the whole things ends in an Allman-Brothers-like melody. On “Respira” the Singers even “sing” and Cline displays his Brazilian influences (Baden Powell), which he combines with tricky west coast fragments. And “Climb Down” sounds as if it was produced by techno-dub sound wizard Adrian Sherwood.

If you ask yourself how weird it can get you have to wait until the end of the album. The last three songs, “Seven Zed Heaven”, “Hairy Mother” and “Sascha’s Book of Frogs” are the highlights of the album. “Seven Zed Heaven” starts like a King Crimson rocker and turns into weird Miles Davis psychedelia. Then the track immerses into crude guitar strumming which becomes a mysterious drone (my favorite moment of the whole record). “Hairy Mother” is nightmarish electric rattling, redeemed by monstrous prog rock guitar lines – imagine the Mothers of Inventions had joined The Mars Volta for a session. As if that all was not enough, the last song, “Sascha’s Book of Frogs” is a complete mystery. An acoustic bass battles with seemingly random electronics and jazzy guitar lines, which become more and more fragmented before Cline puts them through the grinder.

This album could have been a mere mind game devoid of any musical soul – but it is not. It’s a very good record because the intellectual musical textures do not end in themselves, it is always about the music.
Macroscope is the band’s sixth album. They are Cline on guitars, Trevor Dunn on bass (he replaced original member Devin Hoff) and Scott Amendola on drums, and on this album they are augmented by Cline’s wife Yuka C. Honda on keyboards, Zeena Parkins on harp, and Cyro Baptista and Josh Jones on percussion.

”Macroscope“ is available as a CD and a download. Mack Avenue also releases a vinyl version of the album presenting a different sequence of the tracks minus “Canales’ Cabeza,” “Hairy Mother” and “Sascha’s Book of Frogs.”

Macroscope can be bought from the label and will be on sale Tuesday, April 29th.

Reading these reviews, I was starting to think that listing the personnel on an album was something passe. Not until the end of Martin's review do you get to find out who is actually playing besides Nels. As to how they played, I guess we'll have to find that out for ourselves. What I did learn was that the album is a square peg in a round whole.

"This album could have been a mere mind game devoid of any musical soul – but it is not. It’s a very good record because the intellectual musical textures do not end in themselves, it is always about the music."

What does this mean?