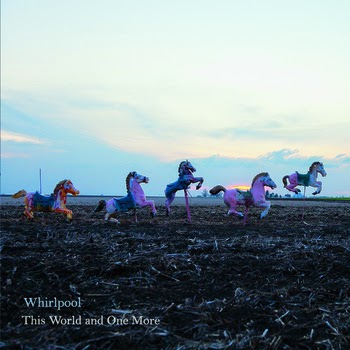 There is a certain duality to Chicago’s Whirlpool debut album “This World and One More”. The trio, featuring an accomplished and eclectic cast of saxophonist Caroline Davis, guitarist Jeff Swanson, and drummer Charles Rumback, creates music that is highly engaging and intellectually satisfying on the one hand and laid-back and melodic on the other.

By being complex enough to be savored while focusing completely on the music and by possessing the qualities that make it enjoyable to listen to as background music, this record breaks several stereotypes. Whirlpool shows that there is no truth to the idea that a modern creative jazz record cannot be both sophisticated and accessible at the same time. Whilst “This World and One More” can be listened in the background, the listener will need to provide their full attention to entirely grasp the level of understanding between the musicians and the wonderful nuances present in the music.

Whirlpool’s style angles more towards the slower side of modern creative jazz, but remains dynamic throughout nonetheless. The sound of the trio is vibrant, mostly consisting of calming and soothing passages with several very appropriately placed energetic and lively segments. There is a sense of flow to the music which evokes images of a slowly moving river... fluid, quiet and powerful. Not a single note is out of place and the way the musicians meticulously build each song from lone sounds, so sparse and yet so cohesive, is impressive. Especially worth mentioning is the nice interplay between the saxophone and the guitar, two harmonically rich and complementary instruments.

The very first song, “Freedom Waves Flotilla”, already sets the pace and general mood that will carry the whole album. An interesting composition that is introspective in its mood and very sonically pleasing. The album continues with “Dreamliner” and “Raysh and Jonah”, two dreamy, saxophone driven pieces which are both minimalist and lush in their approach. But there is also energy on this album as proven by “Dragons in Denver”, a longer, standout song which contains energetic parts, intricate patterns, and humming, atmospheric bass lines. The remaining five songs stay true to this formula with no lesser or filler material played.

Of course, this is not a revolutionary record that would challenge the confines and rules of the genre, and yet it is hard not to recommend it since the music presented here is so sublime and enjoyable. Give it a spin, analyze each detail and each played tone or just relax and get lost in the music. Either way you choose to hear it, “This World and One More” is a delightful album.