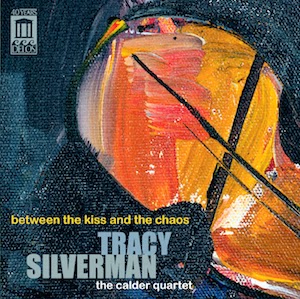 Funded entirely by a successful Kickstarter campaign in 2012 Tracy Silverman and the Calder Quartet’s new disc succeeds on many levels.  More composed than most records we see here in free jazz-ville it is nonetheless equal measures adventurous, genre-bending and fulfilling at the same time.

The first five cuts are with the quartet and the last four are Tracy alone with his six string electric violin, pedal board and looper.  The project began as an original electric violin concerto composed by Tracy scored for electric violin and orchestra and debuted with the Wichita Symphony Orchestra in January 2010.  I for one am certainly glad for the pairing between Mr. Silverman and the Calder’s so the wider world could hear this beautiful, sneaky work.

There’s plenty to love here for classical fans but the music far transcends it, especially the second half of the CD.  I’ve had the pleasure to work with Tracy on occasion and though we mine a lot of the same territory I almost forget to play sometimes and watch in wonder as he weaves his perfect musical tapestries on the spot.  A lot of guys, including myself, use loopers to varying effects but Tracy is a master and he uses it to compose spontaneously to the point you lose track what he currently playing and what he already laid down.  Genius.

The Calder Quartet, who I wasn’t previously familiar with, are precise yet passionate and I can see why they were chosen for this work.  Tracy’s electric six-string violin is perfectly complimented by the acoustic strings and the result is calming and enthralling at the same time.  The level of virtuosity here is astounding.  No mean feat blending electric with acoustic strings but the album is perfectly recorded and every part and each instrument occupies its own unique space in the mix.

The “Between the Kiss and the Chaos” concerto is designated by five famous painters; Michelangelo, Matisse, O’Keefe, Van Gogh and Picasso and it’s a delightful canvas (and the perfect length as well at approximately 30 minutes).  Tracy ends the recording with four pieces covering approximately 27 minutes by himself that boggle the mind.  Very inspired.

Whether you’re a classical fan or not I think you will find this album rewarding and after three listens I’m still finding new textures and have yet to tire of it.  It’s not hard to see why Terry Riley chose Mr. Silverman (who plays in Mr. Riley’s group) to debut his first concerto in 22 years for electric violin last year.  It was recorded in a few locations, including a radio broadcast at Carnegie Hall, and I for one can’t wait to hear it again over and over (I attended the debut at the Nashville Symphony who commissioned the Riley concerto) but in the meantime you can familiarize yourself with Tracy’s work with this excellent CD.  (the Calder Quartet was in fact introduced to “Between the Kiss and the Chaos” process by Terry Riley himself)  Highly recommended.

Check out some sound clips.