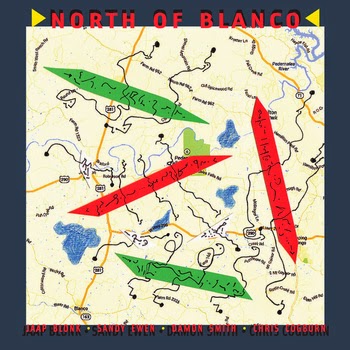 Funny that right after I send in the William Hooker review I get another record with Damon Smith on it.  Sweet.  This is a really cool album with a wide array of diverse sounds and adventurous textures.

Quirky birps and bleeps along with bizarre but somehow welcoming vocalizations characterize the first two songs, “Cueing the Nooks” and “Net Kongo” which isn’t surprising consideration Dutch performance artist Jaap Blonk is on this record.  It’s opens up a bit more atmospherically and dynamically on the next cut, “Winner Kult Song” but the vocalizations remain a constant throughout. Which isn’t necessarily a bad thing but it can wear you down a bit after a while.  Fortunately Mr. Blonk gives guitarist Ewen, percussionist Cogburn and double bassist Smith room to breathe on the next cut “Brewing Tools” before dominating the last third.  Ewen, Cogburn and Smith are sensitive and intuitive musicians who never overwhelm the proceedings and should be commended highly.  With all due respect I’d love to hear them on a record as a trio some time.

“Hebber Took Us In” and “On the Big Wulk” close out the album in the same fashion and credit must be given to all for the cohesiveness of the recording.  Mr. Blonk is an acquired taste but to his credit he didn’t over dominate this album but I can’t help thinking that maybe some folks might be turned off to six cuts lasting almost an hour together of his improvs.  Nonetheless this was a cool collection and I’m glad I got to hear it.  Add a star if you’re a big fan of Mr. Blonk.