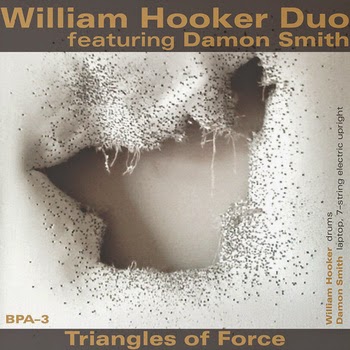 Most musicians know that the most important element of a band is the drummer.  I’ve worked with some of the best but William Hooker isn’t one of them.  I mean, I haven’t worked with him but he is one of the best.  You’d have to be great to get me to listen to a 21 minute opening track of just drums.

Recorded in a nice space at a gig presumably (room ambience not attributed to a normal studio and some audience response) it is very well recorded and you can feel every nuance of Mr. Hooker’s playing.  The drums sound phenomenal.

I first became aware of Mr. Hooker’s work with Thurston Moore and Lee Ranaldo (separately) but this is my first introduction to double bassist Damon Smith’s work and it is fabulous.  He holds down the second song, “Made Anew”, and it is beautiful.  An atmospheric , lyrical and a well-constructed  12 1/2 minute piece.  Frankly, I was hoping it wasn’t another all drum track or this would be a very short review.

Track #3, “Doorway Into Life”, is a nice duet between the two that lasts just over 14 minutes.  You can tell a lot of listening is going on and that these two musicians have a healthy amount of respect for each other as neither steps on the other but adds to the piece nicely and very constructively with Mr. Smith adding some electronic textures in spots via deft bowing.

“Receptivity” is the final cut on the album at just over 12 minutes and flowed so well from the last cut I had to check and make sure they weren’t the same song.  It’s a perfect coda to the album as it’s easily the most dynamic piece of the whole set and Hooker and Smith really interact exceedingly well on this.

If you’re a drummer you can add a half star to this review and if you’re not you can subtract a half but I enjoyed it if for nothing else than to hear William Hooker in another context and to be introduced to Mr. Smith’s work.