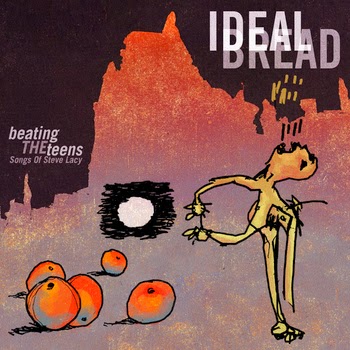 This is an ambitious and impressive recording.  Two CD’s dedicated to the compositions of Steve Lacy, particularly those from his five LP output recorded for the Saravah label from 1971 – 1977. Some of the earliest of Lacy’s compositions and therefore almost embryonic, Ideal Bread band leader Josh Sinton found, “There was enough room for us to be ourselves in this music”.  Known for their improvisational prowess, the NYC based band set out to transcribe note for note these Lacy recordings, including the drums, before rearranging and recording them.  The results are beautiful and brilliant.

Even if you aren’t familiar with the work of Steve Lacy you’ll be entranced by the music encapsulated over the course of these CD’s.  The music breathes, is given ample space and continuously titillates.  In fact, I found myself being pulled back in over and over again while listening even when I had it on for repeated listening as background while I tried to get other work done.  This album doesn’t make demands on the listener but it demands to be taken seriously and thus all the more beguiling and attractive.  One CD would have been impressive enough but 30 songs is a remarkable achievement and the songs are ingeniously arranged so that the music is revealed in layers even after many listens.

I would love to be able to catch this band live but in the meantime we have this fantastic collection to pour over again and again.  Mr. Lacy would be extremely proud.  Highly recommended.

All compositions by Steve Lacy.