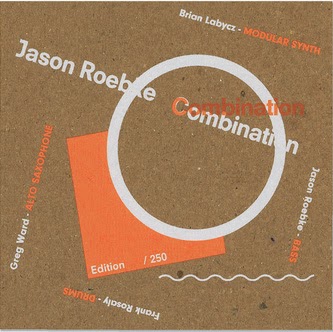 Jason Roebke is a Chicago based musician, a bassist, who studied under Roscoe Mitchell and Rodney Whitaker, and has been very involved in the contemporary jazz and improvised music scene from that city.  The album "Combination," is the debut of his new group -- Greg Ward (alto sax), Frank Rosaly (drums) and Brian Labycz (electronics and various percussion).  The album was recorded live, at the Hideout Club.  It was once a speakeasy and gambling house in the North Branch area, over the years it became a performance space, encouraging the growing independent scene of music, book and poetry readings, and plays.  It becomes an appropriate place for a group's debut, and Combination features a hard bop sound meshed with improv and electronics.

The opening track, "centering," is a firecracker of a tune, with Ward and Rosaly riffing and swinging, and Robeke and Labycz providing counterpoint, Labycz more prominently so, as the radio like shrieking and noise making does not detract but adds to the fury of the piece.  And most of the album seems to play on this notion of consonance and dissonance. Greg Ward seems to be channeling Jimmy Giuffre, with the lyricism of Stan Getz and Jackie McLean's hard bop tone (without the acidity), versus Labycz's industrial electronic sonics.  Some may be put off by Labycz's sound; at times it is like a gnat that you just want to swap away; but I think the purpose is to advance and dislodge the traditional jazz quartet, in this case replacing the piano.  When it works it provides energy, sometimes tension.  When it doesn't, it does become a bug that you want to squash.  It can detract at times. "ballad" and "scanning" are two other standout tracks, the former a quiet, solo piece for Roebke that evolves to something loud when the others join in; the latter another fine updating of the hard bop sound with electronics. "loose leaf" as well really showcases Ward's playing, who is outstanding throughout the album. "vapor" lacks direction, and "slow" seems like it should come from another album, it is conceptually different than the other tracks.

When it works Combination really stretches the possibilities of the jazz quartet, with a forward thinking collective improv sound.  When it doesn't it becomes cluttered and unfocused.  Still, the potential is very high for this group, and one looks forward to their next album to hear where they may go next.